A bird bath and drinking fountain located in Victoria Embankment Gardens, this monument dedicated to Lady Henry Somerset – a key temperance campaigner – was unveiled in the late 19th century. 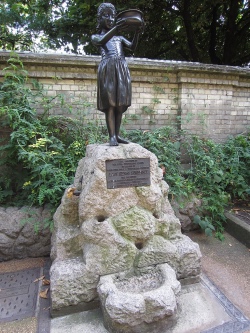 Lady (Isabella) Somerset (1851-1921) was president of the British Women’s Temperance Association from 1890 to 1903, president of World’s Women’s Christian Temperance Union between 1989 and 1906, and founder of a farm colony for inebriate women near Reigate in Surrey.

The monument isn’t actually a true memorial – Lady Somerset was still alive when the bronze, sculpted by GE Wade was unveiled on 29th May, 1897. It had been commissioned by the “Children of The Loyal Temperance Legion” to commemorate Lady Somerset’s “work done for the temperance cause”.

The monument – which depicts a young girl holding out a basin – was Grade II-listed in 1958.

The original statue, however, was stolen in 1971 after it was sawn off at the feet. The statue which now stands there is actually a replica – by Philomena Davidson Davis – installed in 1999.

As well as the dedication, the rough granite plinth upon which the statue stands bears the rather odd inscription (given Lady Somerset’s campaigning), “I was thirsty and ye gave me drink.”