This Smithfield institution owes its sign to its close association with the cloth fair once held nearby. 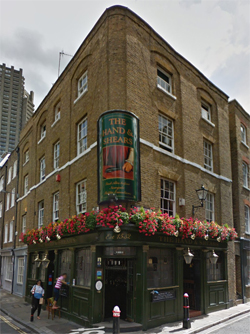 The current Grade II-listed pub at the corner of Middle and Kinghorn Streets dates from the early 19th century but there has apparently been a succession of taverns on the site since the 12th century (the sign on the pub proclaims the date 1532).

Thanks to its location within the precincts of St Bartholomew’s Priory, it became a focal point for the cloth fair which was held nearby between the 12th century and 1855 (the street Cloth Fair is named for it).

As well as being a favoured location for those attending the fair to obtain refreshment, it was also the location of a ‘Court of Pie Powder’ (from French pied poudreux for ‘dusty feet’ ) relating to travelling traders.

The pub’s name, meanwhile, is said to be a reference to the Lord Mayor of London’s practice of officially declaring the fair open by using shears to cut a piece of cloth on the tavern’s doorstep.

The pub also has some association with executions and, legend has it, was a popular spot for people to seek refreshment as they made their way to Newgate Prison where, between 1783 and 1868, executions were held outside the walls in the thoroughfare now known as Old Bailey.