• Brunswick Square, Bloomsbury. In Emma, the main protagonist’s married sister, Isabella, lives here with her lawyer husband John Knightley and children. Isabella is well pleased with her home, noting “We are so very airy”. 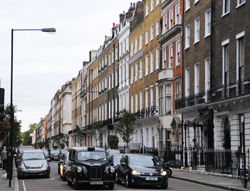 • Harley Street, Marylebone (pictured). John and Fanny Dashwood took a house in this street for the “season” in Sense and Sensibility.

• Bond Street. Well known to Austen, she has Marianne, then upset over Willoughby (who has lodgings here), visit here on a shopping trip in Sense and Sensibility.

• Grosvenor Street, Mayfair. The Hursts have a house in this fashionable West End street in Pride and Prejudice and here Jane Bennet visits Caroline Bingley hoping to see her brother Charles. END_OF_DOCUMENT_TOKEN_TO_BE_REPLACED

It’s probably a bit of a stretch to call Jane Austen a ‘famous Londoner’ (although the city does make a fairly regular appearance in her books) but she did have some strong associations. Given the 200th anniversary of Pride and Prejudice earlier this year, we thought it was only fitting to take a quick look at a five places associated with the author in London…

• 10 Henrietta Street, Covent Garden: Austen stayed in a flat here during the summer of 1813 and during March 1814. The premises was the home of her older brother Henry, then a banker, who moved here after the death of his wife Eliza. While here, Austen visited theatres including The Lyceum and The Theatre Royal, Drury Lane. The building is now occupied by offices.

• 23 Hans Place, Belgravia: The home of her brother Henry (after he moved from Covent Garden), Austen lived for two years in a house here in 1814-15 and is said to have particularly enjoyed the garden. The current building on the site apparently dates from later in the 19th century. There’s a blue plaque located on the house.

• 50 Albemarle Street, Mayfair: The former office of publishers John Murray who counted Austen among their first clients were located here.

• Westminster Abbey: Austen is not buried here but in Winchester Cathedral. However, you will find a small memorial to her in Poet’s Corner, put here in 1967. It simply reads ‘Jane Austen 1775-1817’.

• The British Library, St Pancras: Austen’s rather tiny writing desk can be found here, usually on display in the Sir John Ritblat Gallery. It was donated to the library in 1999 by her Canadian descendents.