Located on the south side of the Strand, the then-named Exeter House was built in the 1300s as the London palace of the Bishops of Exeter on land which had previously been occupied by the Knights Templar. 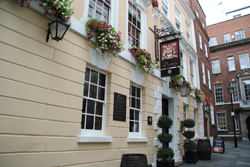 It was Bishop Walter Stapledon who had the palace constructed – as well as being Bishop of Exeter, he was Lord High Treasurer to the unpopular King Edward II, a role which eventually led to him being dragged from his horse in the City of London and murdered.

King Henry VIII gave the property to his Secretary of State, William, Lord Paget, and, in the late 16th century, it came into the hands of Robert Dudley, the 1st Earl of Leicester. He rebuilt it and renamed it Leicester House which it remained until, following his death in 1588, it was inherited by his stepson, Robert Devereux, the 2nd Earl of Essex and a favourite of Queen Elizabeth I, and renamed Essex House.

The house was rather large and in 1590 was reported as having as many as 42 bedrooms as well as a picture gallery, a banqueting suite and chapel.

Devereux ended up beheaded for treason on Tower Hill in 1601 but his son, also Robert Devereux, became a distinguished general for the Parliamentarians during the Civil War. He received a delegation from the House of Commons at the property to offer their congratulations after the Battle of Newbury in 1643 and was laid out in state there in 1646 (insatiable diarist Samuel Pepys, then a 13-year-old boy, was among those who saw the body).

After the Civil War, the family’s debts resulted into the property passing into the hands of other families. The main part of the house was eventually demolished in the 1670s and part of the property sold to developer Nicholas Barbon. He built Essex Street, which still stands in the area, was built on the site.

The remaining part of the house, meanwhile, was used to house the Cotton Library before, in 1777, it too was demolished.

The mansion’s chapel, meanwhile, became a dissenters meeting house, known as the Essex Street Chapel, which became the birthplace of Unitarianism in England. The denomination’s headquarters, named Essex Hall, still stands on the site.

The pub The Devereux (pictured above), named for Robert Devereux, is among the buildings which now stand on the site (for more on the pub, see our earlier post here).

Located at 20 Devereux Court, just off the Strand in the area of London known as Temple, The Devereux takes its name from Elizabethan Robert Devereux, the 2nd Earl of Essex, whose mansion, Essex House, once occupied the site on which it stands. 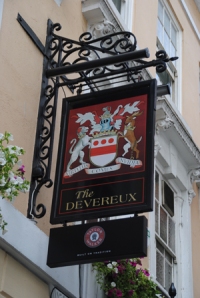 Devereux, a favorite of Queen Elizabeth I, inherited the mansion from his step-father, Robert Dudley, the Earl of Leicester, in 1588 (the house was originally called Leicester House). A spectacular fall from favor which culminated in an abortive coup, however, led to Devereux’s beheading in 1601 (interestingly, he was the last person to be executed inside the Tower of London – the tower where he is held was named after him).

Used by other members of Devereux’s family following his death, a plaque outside the pub explains that the property was sold to property developer, Nicholas Barbon (also noted as the founder of fire insurance), in 1674, and that he had it demolished soon after.

The present building is said to date from 1676 and was originally two houses. Soon after its construction, it became the premises of the famous Grecian Coffee House which had moved from Wapping Old Stairs.

Noted as a meeting place for prominent Whigs, it was also frequented by members of the Royal Society such as Sir Isaac Newton, Sir Hans Sloane and Dr Edmund Halley as well as writer, poet and politician Joseph Addison and Richard Steele, editor of The Tatler (who gave the coffee house as the magazine’s postal address).

The early 1840s, the premises was into lawyers’ chambers and then later into the public house which now occupies it.

There’s a bust of Essex on the facade beneath which is written the inscription, “Devereux Court, 1676”. The pub is these days part of the Taylor-Walker group. For more, see www.taylor-walker.co.uk/pub-food/devereux-temple/pid-C7177.

For a great book on London’s pubs, take a look at London’s Best Pubs: A Guide to London’s Most Interesting & Unusual Pubs