Following on from last week’s post, we look at a couple more London memorials to The Bard,  playwright William Shakespeare… 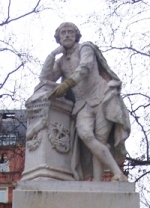 • Leicester Square: Returned to the West End square last year following its restoration (and the square’s redevelopment), this statue of Shakespeare – claimed to be the only outdoor one in London – was designed by architect John Knowles in 1874 when the square was constructed. Now Grade II-listed, it depicts Shakespeare leaning on a pedestal, pointing to a scroll which reads “There is no darkness but ignorance”, a quote from Twelfth Night. An inscription on the plinth upon which Shakespeare stands, refers to the laying out of the square by Albert Grant and doesn’t mention the playwright at all. The statue stands in the middle of a fountain, upgraded  as part of the recent overhaul of the site. PICTURE: Carcharoth/Wikipedia.

• Primrose Hill: Shakespeare’s Tree on Primrose Hill was originally planted in April, 1864, to mark the 300th anniversary of his birth. An estimated 100,000 people marched to the site to watch the tree planting by poet Eliza Cooke and actor Samuel Phelps which was organised by the Workingmen’s Shakespeare Committee – apparently in response to the lacklustre efforts of a government-backed committee to mark the anniversary. The tree stood for 100 years before it died and was replaced with an oak sapling planted in 1964 actress Dame Edith Evans. A plaque which was attached to the tree detailing when it was planted has long since gone but there is talk of some sort of a permanent new memorial on the site.

There are other numerous places in London where Shakespeare – and his works – are remembered in London. One of our favourites is based in Love Lane and recalls the work of John Heminge and Henry Condell is getting Shakespeare’s works out to the world (for more on this, see our previous post here).

In our final post in this series next week, we take a look at some of the key London locations mentioned in Shakespeare’s plays.