Eight days from now, the Lord’s Mayor’s Show will be winding its way through the streets of the City London with star of the show, the new Lord Mayor of London, Roger Gifford, riding in a spectacular gilt State Coach. 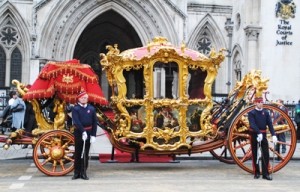 The coach’s origins go back to the mid 18th century although the reason why a coach is used go back some years earlier – to 1711, in fact, when then Lord Mayor Sir Gilbert Heathcote fell off the horse he was riding in the procession and broke his leg. It’s worth noting that up until the 1420s, the Lord Mayor rode all the way to the Palace of Westminster to swear fealty to the monarch – after that they went on a river barge down the Thames, a practice which continued until 1857 (although they still had to ride to and from the watercraft which is when Sir Gilbert had his accident).

While a stand-in coach was used for some years after Sir Gilbert’s fall, in 1757 Sir Charles Asgill, a banker who was set to be the next Lord Mayor, commissioned Joseph Berry of Leather Lane in Holborn to make the splendid vehicle still in use today (the coach was designed by architect Sir Robert Taylor). Built at a cost of £1,065.0s.3d, the substantial sum was met by the Aldermen. It’s now apparently worth more £2 million.

Richly ornate, many of the four ton coach’s features emphasise the role of the City of London as a centre of world trade – the cherubs at each of the coach’s four corners, for example, represent the four continents of Asia, Africa, America and Europe. The City’s coat-of-arms is on the back of the coach, the front panel has an image of Hope pointing at St Paul’s Cathedral and the side panels are decorated with representations of moral virtues.

The coach, which has undergone many restorations (in an indication of this, it’s said there’s as many as 100 coats of paint and varnish on the ceiling), has since been used in every Lord Mayor’s Show and when not in use, can be seen in the Museum of London.