This is the first in our new special series looking at 10 of the best of London’s small museums. We’re not including houses once lived in by famous people (that will be the subject of a later series), but rather those museums which contain some of the city’s most eclectic collections yet still tend to fly a little under the radar when it comes to the crowds… 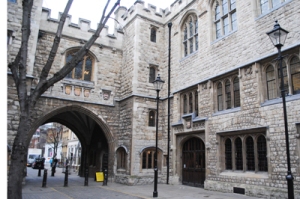 First up, we take a look at the Museum of the Order of St John. The museum – which was reopened in late 2010 following a £3.7 million redevelopment – is located in St John’s Gate in Clerkenwell (pictured), the Tudor era gatehouse of the order’s once substantial London priory.

Told inside is the story of the order, from its founding in the 12th century as the Order of the Hospital of St John of Jerusalem with the aim of caring for sick pilgrims who had travelled to the Holy Land through to its later role as a military order and its Middle Ages moves – following the capture of Palestine by Muslim forces in 1291 – to Cyprus, then Rhodes, and eventually Malta, along with its current work through the charitable foundation of St John Ambulance.

Exhibits include weapons and armour, paintings and illuminated manuscripts (such as the Rhodes Missal of 1504), coins, furnishings, ceramics, silverware and textiles. There is also a 16th or 17th century bust of Jean de la Valette, Grand Master of the Knights Hospitaller from 1557 to 1568 and famed for leading the order to victory in the Great Siege of Malta in 1565 (he is remembered still in the name of the island nation’s capital, Valletta).

As well as the gatehouse (which, following the Dissolution, was used for various purposes including being the childhood home of 18th century artist William Hogarth and, at another time, housing a printing press used by famed lexicographer Dr Samuel Johnson), the museum’s assets also encompass the 12th century crypt under what was once the priory church (it’s located just to the north across Clerkenwell Road). It’s well worth a visit for the stunning 16th century tomb effigies alone.

WHERE: The Museum of the Order of St John, St John’s Gate, St John’s Lane, Clerkenwell (nearest Tube stations is Farringdon); WHEN: 10am to 5pm, Monday to Saturday (tours are held at 11am and 2.30pm on Tuesday, Friday and Saturday); COST: Free (a small donation for guided tours); WEBSITE: www.museumstjohn.org.uk.