Sir Christopher Wren was responsible for designing more than 50 churches in the City of London after the Great Fire of 1666. We’ve already touched on a couple in this series – St Paul’s, of course, and St Bride’s in Fleet Street – and while we won’t be looking at all of rest in detail, here are three stars that have survived…

• St Stephen Walbrook, which is the parish church of the Lord Mayor and was that of Wren himself, is a little gem of a church and is generally thought to be the finest of Wren’s city churches from an architectural perspective. Tucked away behind Mansion House in Walbrook, the church as we know it was built between 1672-79 (although there may have been a Christian church on the site as early as 700 AD) and features a beautiful coffered dome (a sign of what was to come when Wren built St Paul’s). These days the chairs are arranged around white altar stone by sculptor Henry Moore which has been placed under the centre of the dome. Other features worth noting are Wren’s original altar screen and a glass-encased telephone which was the first dedicated help-line in London for the suicidal established by the charity Samaritans. These days the church is home to the London Internet Church. For more information, see http://ststephenwalbrook.net.

• St Mary-le-Bow, which is named for the bow-shaped arches in the Norman-era crypt, was rebuilt by Wren in 1670-80 after the Great Fire. In keeping with the church’s name, he designed a steeple with arches resembling the ‘bows’ below. While the church, located in Cheapside, was badly damaged when bombed in World War II, the steeple – topped by an original 1674 weathervane shaped like a dragon – remained standing along with the outer walls. The church was restored in the mid-Twentieth century and the bells, destroyed in a German air raid, rehung. It’s said that only those born within the sound of St Mary’s bells can be said to be true Cockneys (the Bow bells were also those Dick Whittington apparently heard when leaving London, leading him to turn around and embrace fame and fortune). For more information, see www.stmarylebow.co.uk. 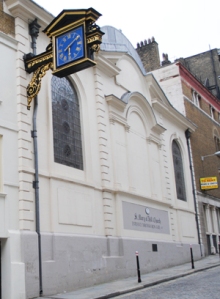 • St Mary-at-Hill, which has served the parish of Billingsgate for almost 1,000 years, was one of the first to be rebuilt after the Great Fire. Both Wren and his assistant Robert Hooke were believed to have been involved in building the church, which was completed in 1677 and lies in Lovat Lane, just off Eastcheap. It was designed as a Greek cross with a dome at its centre  – Wren later put forward a similar design for for St Paul’s which was rejected. Overhauled in the late 1700s and a couple of times in the 1800s, it survived World War II only to be damaged extensively by fire in 1988 after which it was restored. The church’s connection to Billingsgate – the site of London’s former fish market lies just down the road – means that the fish harvest is still celebrated here every October. For more information, see www.stmary-at-hill.org.