Now one of the major thoroughfares of the West End, the origins of the roadway known as the Strand go back to the Roman times leading west out of the city. 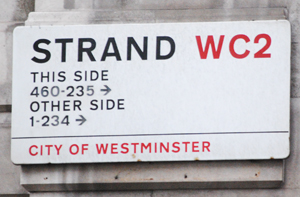 Later part of Saxon Lundenwic which occupied what is now the West End, it ran right along the northern shore of the Thames and so became known as the Strand (the word comes from the Saxon word for the foreshore of a river). During the following centuries the river was pushed back as buildings were constructed between the road and the river, leaving it now, excuse the pun, ‘stranded’ some distance from where the Thames flows.

Sitting on the route between the City of London and Westminster, seat of the government, the street proved a popular with the wealthy and influential and during the Middle Ages, a succession of grand homes or palaces was built along its length, in particular along the southern side.

All are now gone but for Somerset House – originally the home of the Dukes of Somerset, it was built in the 16th century but rebuilt in the 18th century after which it served a variety of roles including housing the Navy Office, before taking on its current role as an arts centre. Others now recalled in the names of streets coming off the Strand include the Savoy Palace, former residence of John of Gaunt which was destroyed in the Peasant’s Revolt, and York House, once home of the Bishops of Norwich and later that of George Villiers, favorite of King James I (see our earlier Lost London entry on York Watergate for more).

After the aristocracy decamped further west during the 17th and 18th centuries, the road and surrounding area fell into decline but was resurrected with a concerted building effort in the early 19th century (this included the creation of the Victoria Embankment which pushed the Thames even further away) which saw it become a favorite of the those who patronised the arts, including the opening of numerous theatres. Among those which still stand on the Strand today are the Adelphi and Savoy Theatres (this was apparently the first in London to be fitted with electric lights and sits on a site once occupied by the Savoy Palace).

Among the other landmarks along the Strand are the churches of St Mary-le-Strand (the present building which sits on what amounts to a traffic island) dates from 1717 and was designed by James Gibbs, and St Clement Danes, designed by Sir Christopher Wren and completed in 1682 (it is now the Central Church of the Royal Air Force). The Strand is also home to the Victorian-era Royal Courts of Justice (it boasts more than 1,000 rooms), Australia House (home of the oldest Australian diplomatic mission), the Strand Palace Hotel (opened in 1907) and Charing Cross Railway Station.