Credited as the creator of the Metropolitan Police Force, Sir Robert Peel was a two-time Prime Minister who oversaw landmark social reforms in arenas ranging from the workplace and prisons to trade. 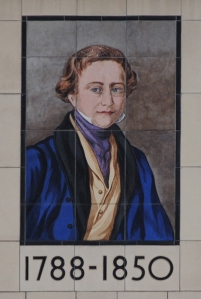 Born on 5th February, 1788, into a wealthy Lancashire family (his father, also Robert Peel, was a cotton mill owner), Sir Robert was educated at Harrow and Oxford before entering parliament as part of the Duke of Wellington’s Tory government in 1809.

He married in 1820 and he and his wife Julia Floyd, the youngest daughter of General Sir John Floyd, had five sons and two daughters.

Having served in roles including under-secretary for wars and colonies and chief secretary for Ireland during his early political life, Sir Robert was appointed Home Secretary in 1822. It was during his subsequent time in the office that he introduced many reforms related to prisons and law and order – including reducing the number of crimes punishable by death by about 100 – and at the same time ordered the foundation of the Metropolitan Police Force (the terms ‘Bobby’ and ‘Peeler’ are both references to his name).

Having later spent time on the Opposition benches, he became Prime Minister in 1834 after Earl Grey’s Whig Government was dismissed by King William IV. It was during this time that he issued the famous Tamworth Manifesto, seen as a defining moment in the creation of the Conservative Party. But frustrated at the minority government, he resigned a year later.

It wasn’t until 1841 that Sir Robert returned to government, again becoming Prime Minister. Subsequent years saw him overseeing the introduction of laws forbidding the employment of women and children underground, limiting working hours for women and children in factories, and, after a long fight, repealing the trade-restricting Corn Laws – a party-splitting act which was apparently a bid to free up more food for the Irish population then in the midst of a devastating famine.

Sir Robert resigned from politics in 1846 and died four years later on 2nd July, 1850, after he was injured falling from a horse in Constitution Hill, London. He was buried at his home, Drayton Manor, near Tamworth in Staffordshire.

The city’s most famous statue of Sir Robert stands in Parliament Square, outside the Palace of Westminster.