2016 is fast approaching and to celebrate, we’re looking back at the 10 most popular posts we published in 2015. Today, we look at numbers four and three… 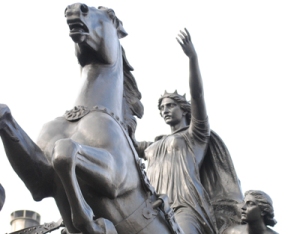 Located at the junction of Cheapside and Poultry, the Great Conduit, also known as the Cheapside Standard, was a famous medieval public fountain.

The Great Conduit (the word conduit refers to column fountains fitted with ‘cocks’ or taps for dispensing the water) gave access to water piped using gravity four kilometres from the Tyburn into the City largely via lead pipes.

It was constructed by the City Corporation from the mid-13th century after King Henry III approved the project in 1237. It was rectangular-shaped timber building with an elevated lead tank inside from which the water was drawn.

It took the name ‘Great’ after further conduits were built further west in Cheapside in the 1390s. There were at least 15 conduits or standards scattered about the City by the time of the Great Fire in 1666.

It was rebuilt several times over its life, notably in the reign of King Henry VI, but after being severely damaged in the fire was deemed irreparable and orders were given for it to be taken down in 1669 (many houses by then had alternate water supplies, notably from the New River project). From the 1360s, management of the conduit was the responsibility of four wardens, maintaining the pipes and charging professional water carriers and tradesmen who required water by allowing free

The Cheapside Conduit was a notable landmark – some executions and other punishments were carried out here, speeches were made from here and the conduit building itself was used as a place for posting information. And to celebrate special occasions it was made to flow with wine – this took place in 1432 when King Henry VI marched through London after being crowned King of France, at the coronation of Queen Margaret in 1445 and at the wedding procession of King Henry VIII’s queen Anne Boleyn in 1533.