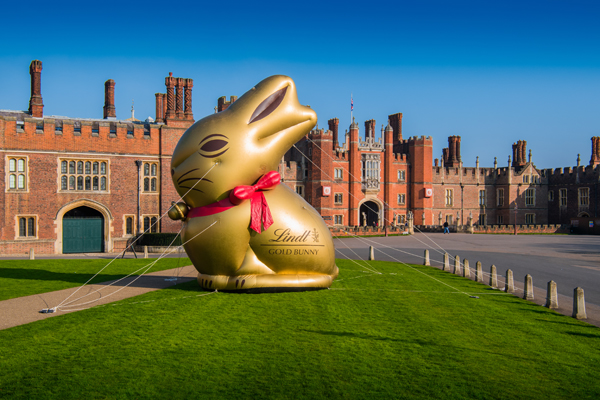 • Join in the hunt for Lindt gold bunnies at Hampton Court Palace this Easter. The bunny hunt is just one of the many chocolate-related activities taking place at the palace over the Easter period – visitors can also explore the history of chocolate and discover how it was made in the palace’s 18th century ‘chocolate kitchen’ by Thomas Tosier, King George I’s private chocolate chef while attractions outside also include the reopened ‘Magic Garden’. An imaginative play garden first opened in spring last year, it invites visitors to explore the world of Tudor tournaments on what was the site of King Henry VIII’s former tiltyard. The Palace Lindt Gold Bunny Hunt runs until 17th April (the Magic Garden is open until 27th October). Admission charges apply. For more, see www.hrp.org.uk/hampton-court-palace/. PICTURE: Lindt & Sprungli (UK) Ltd.

• Joseph Dalton Hooker – dubbed the ‘king of Kew’ – is the subject of a new exhibition in The Shirley Sherwood Gallery of Botanical Art in Kew Gardens. Joseph Hooker: Putting plants in their place explores the life of the botanist, charting his travels to many parts of the world – including  Antarctica and Mt Everest – and how he helped to transform Kew Gardens from a “rather run-down royal pleasure garden” into a world class scientific establishment. The exhibition features an array of drawings, photographs, artefacts and journals including 80 paintings by British botanical artists and an illustration of Mt Everest by Hooker, the earliest such work by a Westerner. Runs until 17th September. Admission charge applies. For more, see www.kew.org.

• On Now – The Private Made Public: The First Visitors. The first in a series of public events and exhibitions celebrating Dulwich Picture Gallery’s bicentenary year, this display features the first handbook to the gallery, a 1908 visitor book which includes the signatures of Vanessa and Clive Bell and Virginia Woolf, and James Stephanoff’s watercolour, The Viewing at Dulwich Picture Gallery, which depicts the gallery’s enfilade as it would have been in the 1830s. The exhibition also looks back at some of the gallery’s first visitors and features quotes from notable artists, writers and critics shown next to works in the permanent collection. Can be seen until 4th June. Admission charge applies. For more, see www.dulwichpicturegallery.org.uk.

Once making chocolate for kings including William III, George I and George II, a special royal chocolate-making kitchen has opened at Hampton Court Palace – the only surviving example of its kind in the country. The opening – which is part of Historic Royal Palaces’ celebration of the 300th anniversary of the Hanoverian accession – comes after research identified the exact location of the kitchen which, having been used as a storeroom, was found in a “remarkably well preserved” state with original fittings such as the stove and furniture intact. Among those known to have worked in the kitchen is Thomas Tosier (pictured above), personal chocolatier to King George I, and it was in here he prepared special chocolate drinks. (Interestingly, Tosier’s wife Grace apparently traded on her husband’s royal association to promote her own chocolate house in Greenwich). A new display in the kitchen explores how the chocolate was made for the king and features copper cooking equipment and bespoke chocolate serving silverware, glassware and linens from the 18th century. The Royal Chocolate Kitchen will also play host to live Georgian chocolate making sessions. PICTURE: © Historic Royal Palaces/Richard Lea Hair.

WHERE: Hampton Court Palace, East Molesey, Surrey (nearest station is Hampton Court from Waterloo); WHEN: 10am to 4.30pm until 29th March after which it’s open to 6pm); COST: Adult £18.20, Concession £15.40, Child under 16 £9.10 (under fives free), family tickets, garden only tickets and online booking discounts available; WEBSITE:www.hrp.org.uk/HamptonCourtPalace/.