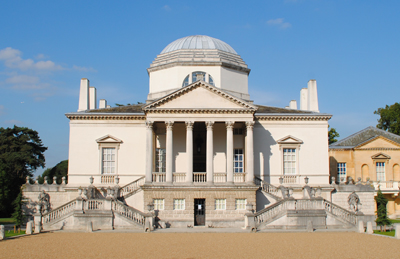 An icon of the Georgian era, Chiswick House in west London is one of the pre-eminent examples of neo-Palladian architecture in Britain and exemplifies the elegance of the time.

Designed by Richard Boyle, the third Earl of Burlington (1694-1753), the two storey, domed villa was inspired by what Lord Burlington had seen of ancient and sixteenth century architecture during his tours of Italy – in particular the work of Andrea Palladio – as well as the work of Palladio admirer, famed English architect Inigo Jones (his statue along with that of Palladio can be seen outside), 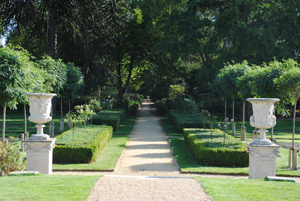 It was constructed in the 1720s, most likely between 1727 and 1729, on a site which had been purchased by the first Earl of Burlington (his grandfather) in 1682 and which was already occupied by a Jacobean-era house (this property, which the third Earl significantly renovated, was eventually pulled down in 1788). The interiors were designed by William Kent in collaboration with Burlington and feature luxurious rooms with velvet-covered walls such as the magnificently restored Blue Velvet Room.

The exact purpose of the property remains something of a mystery – it’s been suggested it was built to as a pavilion for private contemplation, grand entertainments and to house the Earl’s art collection and the fact it had no kitchen is supportive of such a conclusion. But there is evidence it was also used as a functioning house – the fact Lady Burlington died in her bedchamber in the premises in 1758 and the link which was eventually built by Lord Burlington between it and the older property on the estate are suggestive of this. 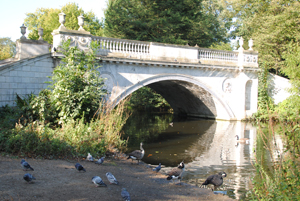 Whatever its purpose, the architectural and artistic masterpiece was complemented by formal gardens which Lord Burlington, again, along with the aid of Kent, extensively altered to create a highly planned but naturalistic-looking landscape. Known as the “birthplace of the English Landscape Movement”, the gardens have influenced everyone from ‘Capability’ Brown to the design of New York City’s Central Park.

Following Lord Burlington’s death in 1753, the house passed into the hands of his grandson, the fifth Duke of Devonshire (his wife was the rather infamous Duchess Georgiana). He extended the house into a large mansion, adding new wings (these weren’t removed until the 1950s) and improved the gardens, adding the stone bridge (pictured) that still stands over the lake.

Upon the fifth Duke’s death in 1811, the house passed into the hands of the sixth Duke, known as the ‘Bachelor Duke’. He made considerable use of the property and guests included Tsar Alexander I of Russia, King Fredrick William III of Prussia, Queen Victoria and Prince Albert, and Tsar Nicholas I (again, of Russia). The Bachelor Duke also extended the grounds and brought a range of exotic animals into them, including an elephant, kangaroos and emus.

Upon his death in 1858, he left the property to his sister and after her death only four years later, it was subsequently let to some rather high-brow tenants including the Prince of Wales who received the Shah of Persia there in 1873,

The estate was eventually sold by the ninth Duke to the Middlesex County Council and after the war, gifted to the Minister of Works. In 1984, care for the house was transferred to English Heritage. The gardens are now owned by the London Borough of Hounslow.

Along with the Chiswick House and Gardens Trust, English Heritage recently completed a £12 million restoration of the gardens which, this year will host the fourth annual Camellia Festival next month. But this stunning property is well worth a visit any time of the year.