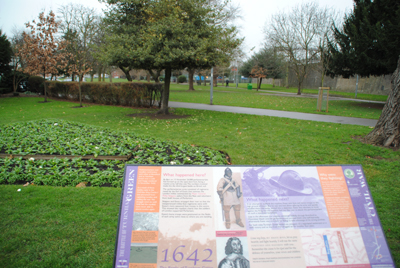 Part of the English Civil War, this battle – really no more than a skirmish – between the Royalists and the Parliamentarians which prevented the Royalists from attacking London which ultimately forced the Royalists to spend winter in Oxford.

Having taken Banbury and Oxford in the aftermath of the inconclusive Battle of Edgehill, a Royalist army had marched along the Thames Valley toward London.

On the 12th November, 1642, the Royalists had defeated two Parliamentarian regiments at Brentford to the west of the City of London. Under the command of Patrick Ruthven, Earl of Forth, but with King Charles I among them, the Royalists, who numbered some 12,000 men, then camped overnight at a site believed to be at or near the village of Turnham Green, now in west London.

Meanwhile, a Parliamentarian army under command of Robert Devereux, Earl of Essex, joined up with London militia under the command of Major General Philip Skippon at Chelsea Field. Numbering some 24,000, they advanced upon Turnham Green where the Royalists awaited them.

Both lines apparently had infantry at the centre with cavalry on the flanks. Essex, attempting to outflank the Royalists, sent troops to high ground at Action but, concerned about splitting his army, soon withdrew them.

The battle them became something of a stalemate – Essex, not seeking to do any more than block the Royalist advance, was happy to wait while the Royalists, outnumbered, short of ammunition and said to have been unwilling to put the Londoners offside, did likewise.

Eventually, late in the afternoon, the Royalists withdrew westward and Essex, who was much criticised for it afterward, gave a half-hearted pursuit. King Charles I then ordered his army back up the Thames Valley to Oxford where they ended up passing the winter.

Less than 50 men in total are said to have died in the indecisive clash which, it can be argued, helped to ensure that the Civil War would go on for another four long years.

While much of the site of the skirmish has been built upon, glimpses of the open ground which once stood here can still be seen. There is an information panel about the battle opposite Turnham Green Tube station.