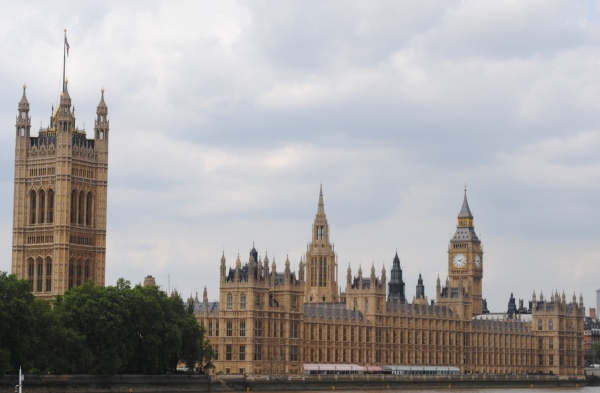 Following the destruction of much of the Palace of Westminster in a fire which broke out on 16th October, 1834, work was launched on a new building to house both the House of Commons and the House of Lords – a building to which both Queen Victoria and Prince Albert had strong connections.

Rebuilding commenced in earnest for the new building 27th August, 1840, when Sarah Barry, wife of architect Charles Barry (his plans for a new Perpendicular Gothic-style Parliament building had been selected from some 97 submissions), laid the foundation stone of the new complex.

Work, to the designs of Barry with the aid of Augustus Pugin, progressed (although a lot slower than was originally envisaged – and a lot more expensively) and the new House of Lords was opened in 1847 followed by the new House of Commons in 1852 (when Barry received a knighthood).

In 1852, Queen Victoria became the first monarch to take the route since used by all sovereigns at the State Opening of Parliament – arriving in the Irish State Coach (still used by Queen Elizabeth II today) she entered the entrance at the base of the Victoria Tower (now known as the Sovereign’s Entrance) and proceeded to the Robing Room where she was dressed in the Imperial State Crown and the Robe of State before processing through the Royal Gallery to the chamber of the House of Lords where she took her seat on the Throne (located opposite the door leading to the House of Commons).

Prince Albert, known for his passion for the arts, chief connection came when he was appointed chair of the Royal Fine Arts Commission in 1835. It oversaw the placement of paintings and sculptures in the building, including five vast frescoes by William Dyce depicting the Arthurian legend which can be seen in the Robing Room.

The prince tragically died on 14th December, 1861, and while the structural work had largely been completed, much of the decorative schemes the commission had envisaged for the palace hadn’t been finished. As a result, many of the decorative aspects Prince Albert had overseen the planning of were never completed.

WHERE: Houses of Parliament (nearest Tube stations are Westminster, St James’s Park and Embankment); WHEN: Tours are held on Saturdays until 25th January 2020 and Monday to Friday between until 30th August 2019 (except 26th August); COST: £26.50 adults/£22 concessions/£11.50 children five to 15 years (children under five are free); WEBSITE: www.parliament.uk.

Queen Victoria was born on 24th May, 1819, at Kensington Palace and to celebrate the bicentenary, the palace, as well as holding two new exhibitions inside – Victoria: A Royal Childhood and Victoria: Woman and Crown, also features a new floral display in the surrounding gardens. A new display in the Sunken Garden which features plant species connected to the Victorian period – including heliotrope, canna, pelargonium and begonia – was planted this month for visitors to enjoy over the summer months. In addition, the palace’s gardens and estates team are showcasing a selection of new plant species discovered during the Queen’s reign around the formal gardens – everything from the Chilean lantern tree identified in 1848 to the Chinese fringe tree identified in 1845 – while the decorative pond which surrounds the statue of the Queen outside the East Front of the palace is being planted with aquatic plants and marginals that highlight and complement the iconic sculpture. There is also a special floral illustration using Victorian-style carpet bedding formed of Sempervivum ‘Mahogany’ to spell out ‘200 years’ in front of the statue (see picture). For more, see www.hrp.org.uk/Victoria2019. PICTURE: © Historic Royal Palaces/Richard Lea-Hair.