Don’t forget to check the site next week when we do our annual most popular posts countdown.

Known as “The Lady with the Lamp”, Florence Nightingale is remembered for her contribution to the development of the profession of nursing and the reform of medical practices during the Crimean War and the latter half of the 19th century.

Born on 12th May, 1820 in Florence (it’s from her birthplace that she gets her name), Florence Nightingale was the second daughter of William Edward Nightingale, son of a wealthy Sheffield banker, and Frances Smith.

She had a relatively privileged childhood at her family’s homes of Lea Hurst in Derbyshire and Embley Park in Hampshire (her father was named High Sheriff of the county in 1828) as well as occasional visits to London and received a broad education.

Believing herself to be called by God into His service when in her mid-teens, she chafed at the life set before her. It was a during visit to  convent which holidaying in Rome with family friends that she became convinced she had a mission from God to tend to the sick.

This was only furthered during a subsequent visit to a religious community at Kaiserswerth am Rhein – a training school for nurses – that finally convinced her of the possibility of making nursing a vocation for ladies. Returning to England, Nightingale took up her first official post – as superintendent of the Hospital for Invalid Gentlemen – in 1853.

The Crimean War broke out in March, 1854, and later that year, aware of reports of the suffering sick and wounded English soldiers were enduring, Nightingale offered her services to the War Office following an invitation by the Secretary for War Sidney Herbert.

Charged with authority over all the nurses (her official title was later Superintendent of the Female Nurses in the Hospitals in the East), Nightingale embarked for Crimea on 21st October with 38 nurses (there’s a plaque at 90 Harley Street – site of the hospital from which Nightingale left for the Crimea). She reached Scutari in Turkey on 4th November, the night before the Battle of Inkerman.

Headquartered in Scutari, Nightingale set about organising the military hospitals, improving general hygiene and conditions and supplies of essentials like clothes and other equipment. The wounded men soon recognised her efforts and began calling her ‘The Lady of the Lamp’ – referring to sight of her checking the wards at night.

Visiting hospitals near and in Balaclava in 1855, Nightingale fell ill from “Crimean fever” but recovered and was able to return to Scutari and continue her work. The following March Nighingale returned to Balaclava and continued to work there until the hospitals closed in July. She returned to England and the family home at Lea Hurst the following month.

In September, 1856, Nightingale had an audience with Queen Victoria at Balmoral – she used the occasion to inform the Queen and Prince Albert of the reforms needed in the military hospital system (and subsequently met with the Queen many times). Backed by data she had collected in the Crimea, Nightingale also pushed for a commission into military hospitals – it was commenced in April 1857 and Nightingale’s written evidence was critical to its recommendations.

In 1860, the Nightingale School and Home for Nurses was established at St Thomas’ Hospital in London (it was funded with £50,000 raised through the Nightingale Fund which had been established in 1855). She as unable to take up the post of superintendent due to ill health and other reasons but continued to take an active interest.

Nightingale – who wrote more than 200 books, reports and pamphlets on hospital planning and organisation, including the famous Notes on Nursing (1859), and interestingly is also said to have invented the pie chart – was also involved in establishing the East London Nursing Society (1868), the Workhouse Nursing Association and National Society for Providing Trained Nurses for the Poor (1874) and the Queen’s Jubilee Nursing Institute (1890).

Her accolades included the German Order of the Cross of Merit and the French Gold Medal of Secours aux Blessés Militaires and the badge of honour of the Norwegian Red Cross Society. She was the first woman to be awarded the Order of Merit and the Freedom of the City of London.

Nightingale died at the age of 90 in South Street London (just off Park Lane – there’s a Blue Plaque marking the spot), on 13th August, 1910. She was buried in the family plot at East Wellow, Hampshire.

There is a memorial to Nightingale as part of the Crimean War Memorial at Waterloo Place and a chapel dedicated to her at Westminster Abbey which is involved in the annual service commemorating her held there on her birthday, International Nurses Day, every year. For more on the service, see our earlier post here.

With Nelson’s Column in Trafalgar Square stealing much of the limelight, the Duke of York’s Column in Waterloo Place tends to get overlooked. So we thought it was time we took a more in-depth look at its history.

The monument is dedicated to Prince Frederick (1763-1827), the second son of King George III and commander-in-chief of the British Army during wars which were fought between France and European powers including Britain between 1792 and 1802.

The Duke was not a successful military commander on the field – his one outing in Flanders was a disaster and is said to have resulted in him being immortalised in the song, The Grand Old Duke of York – but he is celebrated for reforming the army after his return to England.

The almost 42-metre high monument  features a larger-than-life bronze statue of the Duke dressed in the robes of the Knights of the Garter – the work of Sir Richard Westmacott – standing on the top of a granite column and gazing down a series of steps and over The Mall towards St James’s Park.

The overall monument was designed by Benjamin Dean Wyatt. His design was selected by a committee from among other submissions and erected between 1830-33. While the Duke was an inveterate gambler and died deeply in debt, the British Army is said to have voted to forgo a day’s pay to fork out the £25,000 required to build the commemorative monument. It was said in jest that the height of the monument allowed the Duke to escape his creditors.

Interestingly, the hollow column contains a spiral staircase which originally gave access to a viewing platform at the top. Access was apparently prohibited after a spate of suicides.

Looking for more on statues and monuments around London – why not check out Peter Matthews’ London’s Statues and Monuments?

The life of Florence Nightingale, ‘The Lady with the Lamp’, depicted here on the Crimean War Memorial at Waterloo Place, is to be commemorated at the annual service in Westminster Abbey tomorrow. The Florence Nightingale commemoration service is held “to celebrate nursing and midwifery and all staff, both qualified and unqualified working in these services”. During the service a lamp, carried this year by Claire Gibbs, will be taken from the Abbey’s Florence Nightingale Chapel (formerly known as the Nurses’ chapel but rededicated in May 2010 – the centenary of Nightingale’s death) and escorted by a procession of nurses – this year it’s students from Liverpool John Moores University – to Reverend Professor Vernon White who will place it upon the High Altar. The address will be given by the former Archbishop of Canterbury, Lord Carey. Nightingale (1820-1910) rose to fame for her pioneering nursing work during the Crimean War and established the first secular nursing school in the world at St Thomas’ Hospital in London. The upcoming International Nurses Day is celebrated each year on her birthday – 12th May. Tickets for this year’s commemoration service are already allocated – to apply for tickets to next year’s, keep an eye on www.florence-nightingale-foundation.org.uk for details. 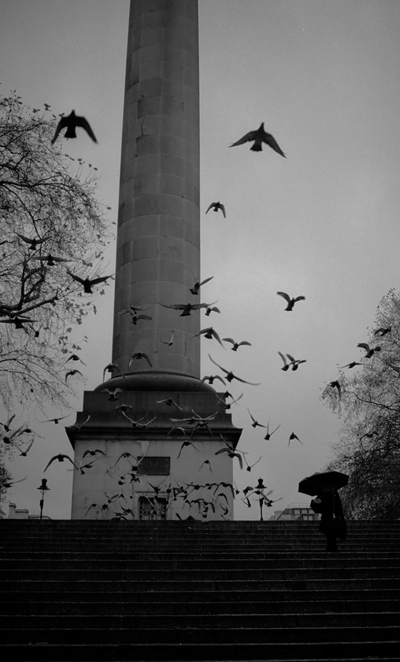 Says the photographer, Aaron Reiff-Zall: “It’s the Duke of York column, there are some steps down from Waterloo Place to The Mall. I live in London, so have done a lot of street photography here. As well as being very interested in its history and culture much like yourselves. I stood out in the rain for maybe an hour-and-a-half to craft that shot, I thought the column would make a nice back-drop, and there are always lots of birds milling about at the top. So I knew if I waited, the right person will come along and disturb them to produce the shot I wanted. After a few false alarms, and times when the birds didn’t go the way I wanted, I saw this lady with the umbrella happen by, framed the shot, hoping it would be right, and at the right moment when the birds took to flight, they luckily flew towards me as I wanted, I captured a burst of maybe five frames of film. Developed that and voila!” For more of Aaron Reiff-Zall’s work, see www.flickr.com/photos/aaronrz/.

Taken an interesting photograph of somewhere in London? We’re always looking for interesting images of the city so if you’ve got one you reckon captures a snippet of life in London, please contact us at exploringlondon@gmail.com or via our new Flickr group at www.flickr.com/groups/exploringlondon/