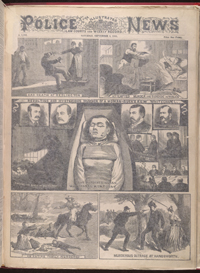 • The UK’s largest ever exhibition on comics opens at the British Library tomorrow. Comics Unmasked: Art and Anarchy in the UK examines the history of the comic book in the UK – from 19th century illustrated reports of Jack the Ripper to 1970s titles like 2000AD and Action and more recent works – and examines how they have been used to explore confronting subjects like violence, sexuality and drugs. Among the highlights is a specially commissioned work by Tank Girl and Gorillaz co-creator Jamie Hewlett and works by the likes of Neil Gaiman (Sandman), Alan Moore (Watchmen, V for Vendetta), Grant Morrison (Batman: Arkham Asylum) and Posy Simmonds (Tamara Drewe). Admission charge applies (and due to the graphic nature of some exhibits, the Library has issued a parental guidance warning for under 16s). Runs until 19th August. For more, see www.bl.uk/whatson/exhibitions/comics-unmasked/index.html. PICTURE: Jack the Ripper’s victims, Illustrated Police News, 1888 © British Library Board.

• The history of the white wedding dress goes under scrutiny at the V&A with its Wedding Dresses 1775-2014 exhibition opening on Saturday. The display includes more than 80 extravagant outfits from the museum’s collection – they include the Anna Valentine embroidered silk coat worn by The Duchess of Cornwall for the blessing of her marriage to The Prince of Wales in 2005, a purple Vivienne Westwood dress chosen by Dita von Teese for her wedding in 2005 and Dior outfits worn by Gwen Stefani and Gavin Rossdale on their wedding day in 2000. Some of the earliest examples in the chronological display including a silk satin court dress from 1775 and a ‘polonaise’ style brocade gown with straw bergere hat dating from 1780 lent by Chertsey Museum. The exhibition will also explore the growth of the wedding industry and the increasing media focus on wedding fashions. Admission charge applies. Runs until 15th March. For more, see www.vam.ac.uk.

• The golden era of Italian film during the 1950s and 1960s and the birth of celebrity culture – did you know the term paparazzi was coined in the 1960 Federico Fellini film La Dolce Vita? – are the subject of a new exhibition which opened at The Estorick Collection this week. The Years of La Dolce Vita features 80 photographs from the period depicting Italian movie stars and the Hollywood “royalty” like John Wayne, Charlton Heston, Lauren Bacall and Liz Taylor who were working in Italy at the time. Juxtaposed against Marcello Geppetti’s images of this “real-life dolce vita” are behind-the-scenes shots from the set of La Dolce Vita taken by cameraman Arturo Zavattini. Runs until 29th June. Admission charge applies. For more, see www.estorickcollection.com.

• The first British exhibition to explore the role of architecture in the Italian Renaissance opened at the National Gallery this week. Building the Picture: Architecture in Italian Renaissance Painting looks at the works of Italian masters such as Duccio, Botticelli and Crivelli with highlights including Sebastiano del Piombo’s The Judgment of Solomon – on display in London for the first time in 30 years – and Andrea del Verrochio’s The Ruskin Madonna. Five short films also form part of the display. Entry to the exhibition in the Sunley Room is free. Runs until September 21. For more information, see www.nationalgallery.org.uk.

Send all items of interest for inclusion to exploringlondon@gmail.com.