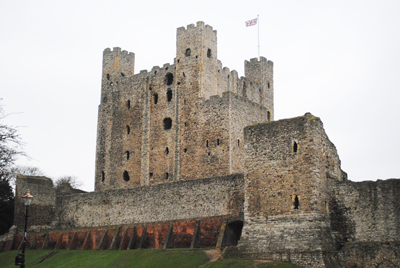 We’ve visited Rochester before but given it’s the 800th anniversary of the Magna Carta we thought it would be good to take a more in-depth look at Rochester Castle and the events that took place there after the sealing of the “Great Charter”.

Rochester Castle was first built in the aftermath of the Battle of Hastings as a Norman stronghold to control the Medway and the Roman road – Watling Street – which crossed it at that point. There was a Roman-era town on the site and it’s likely the first castle – surrounded by a deep ditch and featuring walls of earth topped with timber – was  built within the town’s walls – possibly on the site of the existing castle.

Work on a stone castle was started in the late 1080s by Gundulf, the Bishop of Rochester (he also built the first Tower of London), and the castle precincts outer walls still largely follow the line of his original curtain walls. The keep was built by William de Corbeil, Archbishop of Canterbury, who was granted the castle by King Henry I in 1127. It remained in the custody of the archbishops until the events of 1215.

Following the sealing of the Magna Carta in May, relations between King John and the barons soured again into outright civil war with the castle declared for the rebels. In October and November, 1215, it was held for some seven weeks by a force of knights – accounts suggest between 95 and 140 – against the forces of King John. These eventually breached the south curtain wall and after the forces of the knights – who were led by William de Albini and Reginald de Cornhill – retreated to the keep, the king ordered his sappers to work.

The miners were successful in undermining the south-west tower which collapsed along with a large section of the keep (the fat of 40 pigs were apparently used to make sure the fire in the mine was hot enough). The defenders nonetheless kept fighting, retreating further into the remains of the keep, until they were eventually forced to surrender when faced with starvation. King John’s fury at their resistance was said to be great but while some of the defenders lost their hands and feet when they were apparently lopped off on his orders after surrendering, he was convinced to spare the holdouts from being hanged on the spot and merely had them imprisoned.

The tower was later rebuilt by King John’s long ruling son, King Henry III, and you can see its distinct round shape (in contrast with the earlier, square towers) when looking at the keep today. (Incidentally, King John’s siege was the castle’s second major siege – the first had taken place in 1088 when the forces of King William II (Rufus) had besieged the castle which was then held by the rebellious Odo, Bishop of Bayeaux, who was involved in an attempt to put William the Conqueror’s eldest son, Robert, Duke of Normandy, on the throne in place of William (who was the second son). Odo was forced to come to terms and exiled as a result of the siege).

In the hands of the Crown after King John’s siege, the castle was again the site of a siege in 1264 – this time unsuccessful when rebels under the command of Simon de Montfort failed to take it from those of King Henry III (although the garrison was later forced to surrender following events elsewhere).

It was rebuilt and repaired a number of times, including during the reigns of King Edward III and that of King Richard II (during whose reign it was also ransacked in the Peasant’s Revolt of 1381). Other kings to visit it over the years included King Henry VII and King Henry VIII.

Already much deteriorated and neglected, in 1610, King James I gave the castle to Sir Anthony Weldon whose family sold off some of the timber and stone to local builders. It survived the Civil War without incident and was used as a public pleasure garden from the 1870s onward before, in 1884, it was sold to the City of Rochester. In 1965 responsibility for its care was given to the Ministry of Public Building and Works. Current managers, English Heritage, took over the site in 1984.

The castle remains an imposing site in Rochester and the outer walls of the keep remain intact even if it’s no more than a shell. Worth the climb to the top simply to take advantage of the spectacular views of the town and cathedral below!