It’s not often you’d come across a church named after a type of shoe, but that’s the case with the church of St Margaret Pattens. 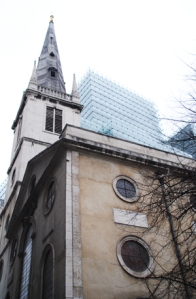 Located in Eastcheap, a church dedicated to St Margaret – a saint who was martyred in Antioch in the Middle East – has stood on the current site for at least 900 years. The earliest reference dates from 1067 and the church was rebuilt at least once in the medieval period, with the costs of construction apparently partly funded out of gifts presented to a crucifix or rood which stood in Rood Lane close to the church.

It’s only since the 17th century, however, when the church was rebuilt to the design of Sir Christopher Wren after the Great Fire of London, that it took on the name ‘Pattens’ to distinguish itself from other churches dedicated to St Margaret.

Pattens were wooden undershoes which were trapped beneath normal footwear and raised the wearer above the street, allowing them to walk across muddy roads and still arrive at their destination cleanshod. This footwear was apparently made and sold near which the church was located.

The trade of pattenmaking, incidentially, died out as streets became paved – according to the church’s website, the last pattenmaker died in the 19th century. There’s still a sign in the church asking women to remove their pattens before entering.

It’s worth noting before we move on that there is an alternative theory as to the origins of the name – this is that it commemorates a benefactor, possibly a canon at St Paul’s named Ranulf Patin – but it’s the former interpretation which is more widely accepted.

St Margaret Pattens, which was united with that of St Gabriel Fen after the latter was destroyed in the Great Fire, was damaged by bombing in World War II but was restored in the mid 1950s.

While the church lost many of its valuables during the Reformation (with the exception of a silver gilt communion cup dating from 1545 – on loan to the Victoria & Albert Museum), notable features inside include a memorial to King Charles I (since 1890, the king has been remembered in a special service each year held on the nearest Thursday to the date of his execution – 30th January) and a Royal Stuart Coat-of-Arms believed to be those of King James II.

There’s also a reredos containing a painting by Italian Carlo Maratta (1625-1713), two unusual canopied pews reserved for churchwardens, an hourglass dating from 1750 used to time the sermons, and a bell which dates from before the Great Fire. It’s also possible to view a set of pattens.

WHERE: Corner of Eastcheap and Rood Lane (nearest Tube stations are Monument, Bank and Tower Hill). WHEN: Weekdays from 10.30am (check website for services); COST: Free; WEBSITE: www.stmargaretpattens.org.