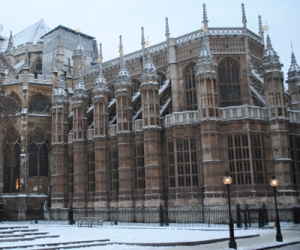 But before we turn to James himself, it’s worth noting that several members of his immediate family are also buried in the abbey’s Lady Chapel (pictured). These include his eldest son, Henry Fredrick, Prince of Wales, who died in 1612 at the age of 18 (and thus opened the way for his younger brother Charles to become King Charles I). He is buried in the south aisle of the magnificent Lady Chapel which had been added at the behest of King Henry VII between 1503 and 1519 and replaced a 13th century chapel.

Three of James’ daughters are also buried in the Lady Chapel – Mary, who died in 1607, aged two, and Sophia, who died in 1606, aged just three days old. Both of them have monuments in the north aisle while their sister Elizabeth, wife of King Fredrick V of Bohemia, who died much later in 1662, is buried near her brother Henry Fitzpatrick.

As we’ve previously mentioned, King James I also outlived his wife, Queen Anne of Denmark, who died of dropsy at Hampton Court Palace on 2nd March, 1619, at the age of 43. She lay in state at Somerset House until her funeral on 13th May and was then buried in the south-eastern area of the Lady Chapel where her gravesite is marked by a modern stone bearing her name. Her wooden funeral effigy is one of a collection which can still be seen in the Abbey’s Museum.

After James himself died on 27th March, 1625, he was laid in the vault beneath King Henry VII’s monument beside Elizabeth of York, Henry’s wife. No monument was erected to mark his passing save for a modern inscription placed nearby (in fact Queen Elizabeth I was the last monarch to be buried with a monument above the site – see below).

It’s also worth noting that in 1612 – nine years into his reign – James arranged for the body of his mother – Mary, Queen of Scots, who was executed in 1587 on the orders of Queen Elizabeth I – to be transferred from its resting place in Peterborough Cathedral to the south aisle of the Lady Chapel where he had an elaborate tomb erected featuring an elegant white marble effigy showing her wearing a coif, ruff and long mantle.

In the north aisle, James had previously erected a marble monument to his predecessor, Queen Elizabeth I and had her body moved from where it had lain in the vault of her grandfather, King Henry VIII, to a place beneath the new monument. Her half-sister, Queen Mary I, is also buried beneath the monument.

That’s the final in our series on King James I’s London – it’s by no means a comprehensive look at significant sites in the early Stuart period and we shall be looking at more from the period down the track, but it’s a good start. Our new special series starts next week.