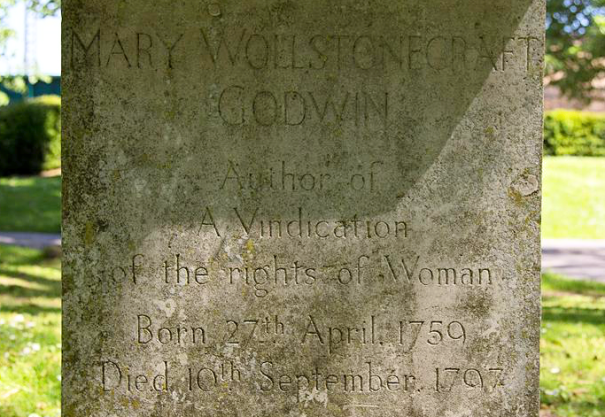 Having died in 1797 at the age of just 38, Mary Shelley’s mother and noted feminist, Mary Wollstonecraft, was buried in the churchyard of St Pancras Old Church.

“Her remains were deposited, on the fifteenth of September, at ten o’clock in the morning, in the church-yard of the parish church of St Pancras, Middlesex,” wrote Godwin afterwards. “A few of the persons she most esteemed, attended the ceremony; and a plain monument is now erecting on the spot, by some of her friends…”

Apart from the fact it is where her mother was buried, the grave played an important role in Shelley’s story. Not only is it said that her father, William Godwin, taught her to read her name by tracing the letters on the gravestone, it later became a place of key importance for Shelley in her developing relationship with Percy Bysshe Shelley.

In fact, it was at this gravestone that Mary and the poet would meet in secret prior to their elopement to Europe (some even speculate it was here that they first consummated their love). Secrecy was a necessity – Percy Shelley was already married and Mary’s father disapproved of their relationship.

Interestingly, Wollstonecraft is no longer buried here (although the gravestone still stands there). In 1851, as per the wishes of Mary Shelley, Wollstonecraft’s remains – and those of her husband which were buried there after his death – were removed by her grandson, Percy Florence Shelley and reinterred in the Shelley family tomb in St Peter’s Churchyard in Bournemouth.

The tomb is Grade II-listed. The lettering was restored in 1992 to mark the bicentenary of the publication of Wollstonecraft’s A Vindication of the Rights of Woman.