While the remains of some of London’s oldest purpose-built theatres – such as The Rose and The Globe – can be found in once notorious Southwark, London’s oldest, still-in-use theatre is in fact in the West End. The Theatre Royal Drury Lane (not to be confused with the Theatre Royal Haymarket) apparently takes the honor – the latest incarnation of a theatre which has still on the same location since 1663. 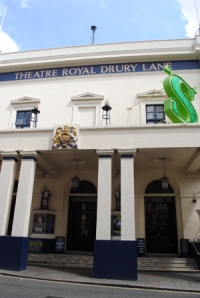 First built on the orders of Restoration-era dramatist and theatre manager Thomas Killigrew, the original theatre on the site – where King Charles II’s mistress Nell Gwynn apparently trod the boards and which was originally known as the Theatre Royal in Bridges Street – was burnt down in 1672 only to be rebuilt to the designs of Sir Christopher Wren two years later.

This building lasted for more than a century before it too was demolished – this time to make way for a larger theatre which opened its doors in 1794. Fire seems to have been a perennial problem, for it too burned down in 1809, being rebuilt and opened again in 1812 with a performance of Hamlet (the current building, designed by BenjaminWyatt).

Now owned by star composer Andrew Lloyd Webber via his Really Useful Group, the building has associations with some of London’s theatreland’s finest names – everyone from eighteenth century actor David Garrick (one of the theatre’s managers) to early nineteenth century child actress Clara Fisher and, in more recent times, Monty Python.

Currently hosting Shrek: The Musical, other recent productions there have included Miss Saigon and a musical adaption of Lord of the Rings.