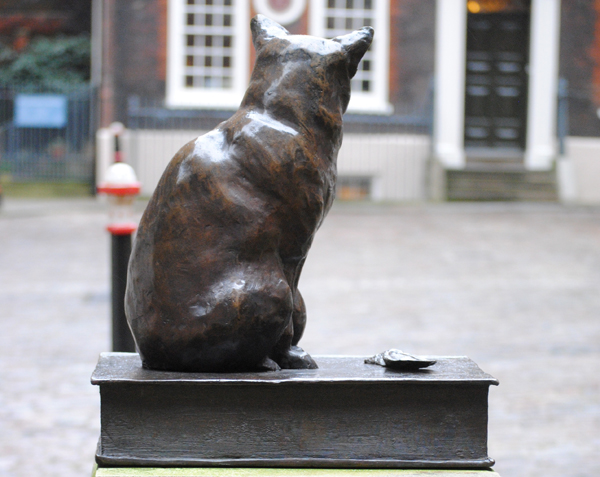 Congrats to Mike, Debbie, Janet, and Zoe (on Facebook), this is indeed the back of the statue of Hodge the cat in Gough Square in the City of London, just outside Dr Johnson’s House at No 17. One of the cats of the famed lexicographer, Dr Samuel Johnson, Hodge had his own moment of stardom in James Boswell’s Life of Johnson in which Dr Johnson is heard remarking that he’s had better cats than Hodge before, apparently in response to Hodge’s reaction, stating that he was “a very fine; a very fine cat indeed” (Johnson was apparently unusual for his love of cats; Boswell did not suffer the same love). This bronze statue of Hodge, by sculptor Jon Bickley and placed here in 1997, has Hodge sitting on a copy of Dr Johnson’s famous dictionary and beside him is some empty oyster shells, referring to Dr Johnson’s habit of buying oysters for his cats to eat. For more on Dr Johnson’s House (where Dr Johnson lived from 1747-59), see www.drjohnsonshouse.org.