• A new exhibition celebrating the art of the Underground opens at the London Transport Museum in Covent Garden tomorrow. Poster Art 150 – London Underground’s Greatest Designs showcases 150 posters with examples taken from each decade over the past 100 years. Artists include the likes of Edward McKnight Kauffer, Paul Nash and Man Ray. The posters were selected from the museum’s archive of more than 3,300 by a panel of experts. Visitors to the exhibition will be able to vote on their favorite poster as well as online with the most popular poster to be revealed at the end of the exhibition. The last major exhibition of Underground posters – the first commission of which was in 1908 – was held in 1963 to celebrate the system’s centenary. The exhibition is based around six themes – ‘Finding your way’, ‘Brightest London’, ‘Capital culture’, ‘Away from it all’, ‘Keeps London going’ and, ‘Love your city’. Runs until 27th October. Admission fee applies. For more on the exhibition and surrounding events, see www.ltmuseum.co.uk. 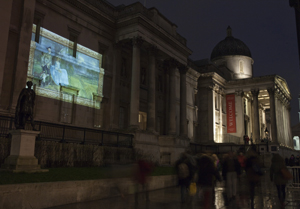 • The external facade of the National Gallery in Trafalgar Square was decorated with artworks last Friday night (pictured right) in celebration of the completion of Your Paintings – a website which hosts the UK’s entire national collection of oil paintings (more than 210,000!). The projections – which were happening in 28 UK cities simultaneously – featured two National Gallery paintings – Van Gogh’s Sunflowers and Gainsborough’s Mr and Mrs Andrews. To see the website, head to www.bbc.co.uk/arts/yourpaintings/. PICTURE: © The National Gallery, London.

• On Now: Becoming Picasso: Paris 1901. This exhibition at The Courtauld Gallery in Somerset House on The Strand tells the story of Pablo Picasso’s break-through year as an artist – 1901 – when the then 19-year-old launched his career in Paris at a summer exhibition. The display follows Picasso from his debut and into the start of his Blue period. Works exhibited are among the first to bear his famous signature. Runs until 26th May. There is an admission charge. For more, see www.courtauld.ac.uk/gallery/index.shtml.

• On Now: Through American Eyes: Frederic Church and the Landscape Oil Sketch. This free exhibition of 30 works at the National Gallery focuses on the work of Frederic Church (1826-1900), a member of the Hudson River School of artists and considered by many to be the greatest of the American landscape oil sketch artists. Works on display include those made at exotic locations such as Ed Deir, Petra, painted in Jordan in 1868, and Distant View of the Sangay Volcano, Ecuador, painted in 1857, as well as the paintings created closer to home, such as Hudson, New York at Sunset, painted in 1867. The exhibition is held in Room 1. Runs until 28th April. For more see www.nationalgallery.org.uk.