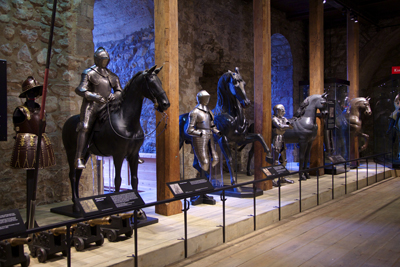 • The Tower of London’s iconic exhibition, the Line of Kings, has had a makeover. Described as the “world’s longest running visitor attraction”, the Line of Kings features more than 500 objects including historic suits of armour – such as those worn by King Henry VIII, King Charles I and King James II – as well as life-sized wooden horses and individually carved king’s heads, many of which were made between 1685 and 1690. The exhibition was originally created following the Restoration in 1660 and was used as propaganda to promote the king’s rule (interestingly omitting queens and featuring only those deemed “good kings”). Rearranged and dispersed over the centuries, it’s been brought back together in the White Tower and reopened last month. Entry to the exhibition – a collaboration between Historic Royal Palaces and the Royal Armouries – is free as part of general admission to the Tower. For more, check out www.royalarmouries.org/line-of-kings. PICTURE: HRP/Newsteam

• Four cameras mounted on top of St Paul’s Cathedral’s Golden Gallery have captured a 360 degree time lapse video of the capital. The video, which was shot in early July, captured 36 hours in the life of London and is the work of specialist photographer Henry Stuart who previously completed two projects from the Golden Gallery – a GigaPixel image of London and a Day Meets Night image. The latest project captured some 8,000 panoramic images. The time lapse video, which is set to Kyrie from Wolfgang Amadeus Mozart’s Missa in C major ‘Missa solemnis’ K337 being sung by the St Paul’s Cathedral Choir, can be found at http://visualise.com/videos/london-360-time-lapse-from-st-pauls-cathedral.

• On Now: London Cycles. This free exhibition at the Museum of London looks at cycling in the capital with highlights including 10 large scale portraits by Ugo Gattoni, bikes including an 1880s “boneshaker”, a penny farthing, an 1930s Enfield cycle and a ‘Boris’ bike as well as head cam footage from riders including from the annual Tweed Run bike. The free display runs until 22nd September. For more, see www.museumoflondon.org.uk.