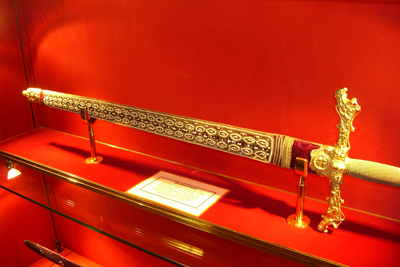 One of five City of London swords, tradition holds that the sword was given to the City Corporation by Queen Elizabeth I when the Royal Exchange opened in 1571.

It takes its name from its pearl-encrusted scabbard – there’s said to be 2,500 of them sewn onto it – and was traditionally used in celebrations. These include a ceremony which takes place when the reigning monarch comes in State to the City. 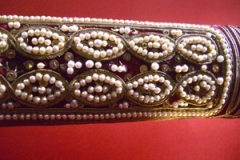 Seen during last year’s Diamond Jubilee celebrations, the ceremony involves the Lord Mayor taking the sword from the Sword-Bearer and offering it hilt-first to the monarch to touch – a symbol of the monarch’s authority over the city. It is then borne aloft in front of the monarch by the Lord Mayor.

Interestingly, the tradition of the monarch touching the sword hilt is said to date from the reign of King Charles I when the king entered the City in 1641 and just touched the sword given to him and handed it back to the Lord Mayor. Prior to that, the sword was handed over to the sovereign for the during the visit.

The City’s other four swords include the State Sword, the Mourning Sword, the Old Bailey Sword and Mansion House Justice Room Sword.

Guided tours of Mansion House – official residence of the Lord Mayor of London and where the Pearl Sword can be seen – are conducted on Tuesdays at 2pm (although it’s closed for August for refurbishments and on selected dates after that). Head here www.cityoflondon.gov.uk/mansionhousetours details. PICTURES Courtesy City of London.

One thought on “Treasures of London – The Pearl Sword…”