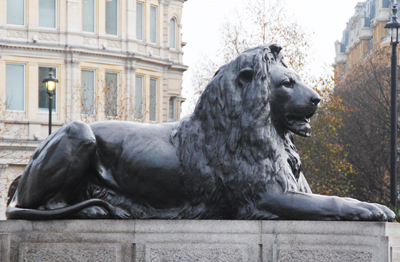 Dwarfed by the towering form of Nelson’s Column in the southern part of Trafalgar Square, the four lions at the base of the column’s plinth – known to some as Landseer’s Lions – are now a favourite of tourists and Londoners alike. But it wasn’t always so.

While the column was erected in 1843 and the fountains in 1845, it wasn’t until 1867 that the lions – designed by Sir Edwin Landseer – appeared in the square. The reasons for the delay were apparently several including arguments over the artistic vision of the sculptures and funding and Landseer’s own ill-health.

Indeed, Landseer, best known as a painter of animal subjects, wasn’t the first choice as sculptor but was only commissioned after the models of the first sculptor – Thomas Milnes –  was rejected (there’s a terrific painting by John Ballantyne of Landseer working on the lions in the National Portrait Gallery).

As a result when the lions were eventually unveiled, they were held to general ridicule when they finally arrived, costing thousands of pounds more than what had been budgeted for them.

While the lions were initially going to be made of granite, Landseer’s 20 foot long lions were cast by Baron Marochetti in bronze at his Kensington studio. The form of the lions was apparently modelled on a dead lion which, according to Ed Glinert in The London Compendium, were brought to his studio in St John’s Wood by cab from the London Zoo, although all four lions have distinct faces.

Legend has it that the Grade I-listed lions will come to life if Big Ben chimes 13 times.

There has been concern in recent years about the damage people are doing to the lions in climbing on them with one report recommending that the public be banned from climbing on them.

For more, see our previous posts on Nelson’s Column and Trafalgar Square.

2 thoughts on “Treasures of London – The lions of Trafalgar Square…”