While the history of the General Post Office dates back to the reign of King Charles I, London’s first purpose-built facility for mail was constructed on the east side of St Martins-le-Grand in the 1820s. 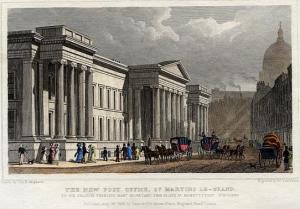 The post office headquarters had hitherto been located in the area of Lombard Street but in 1814 it was decided that the site here couldn’t be developed any further. The site in St Martins-le-Grand was subsequently acquired and plans for the building commenced.

Designed by Sir Robert Smirke (famous for his design of the British Museum), the grand structure was built on the site of what were slums between 1825 and 1829 and featured a 400 foot long “Grecian-style” street frontage. The exterior of the building was lit with 1,000 gas burners at night.

As well as serving as the post office’s administrative headquarters, the building also contained the sorting office and the main London public post office. Along with a grand public hall and offices, it contained rooms – including an armoury – for the guards who protected mail coaches and accommodation for clerks charged with receiving foreign mail (obviously at all hours!).

A new building was added to house the telegraph department on the west side of the street in the 1870s and further buildings followed, leading Smirke’s initial building to become known as ‘GPO East’.

In 1910, the facility was bursting at the seams and so the headquarters was moved to the King Edward VII Building. Smirke’s grand building was somewhat controversially demolished in 1912. A fragment – one of the capitals which topped one of the external columns – is apparently located in Vestry Road in Walthamstow.