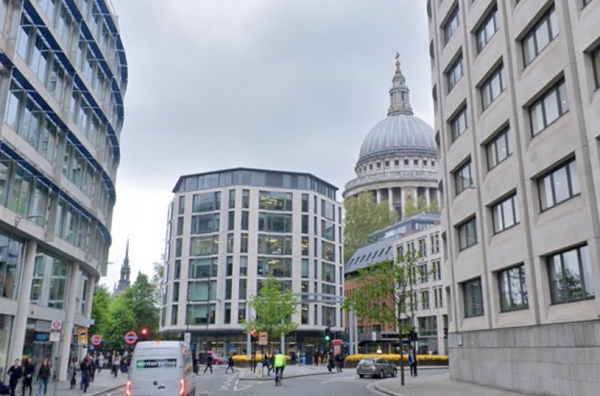 This City of London street is named for a church which once stood to the east of the thoroughfare.

The collegiate church, which had the job of sounding the curfew bell in the evenings to announce the closing of the city gates during the reign of King Edward I (the right later moved to another church), gave special rights to the precinct in which it stood including that of sanctuary for certain types of criminals. Indeed, by the 14th century, it was the largest area of sanctuary in England.

This was particularly useful for those making what was supposed to be their final journey from Newgate to their execution at Tower Hill – the precinct lay along the route and, yes, some were said to have escaped into the district as they passed by. But perhaps the most famous said to have sought sanctuary in the precinct were Miles Forrest, one of those accused of murdering the so called “Princes in the Tower” – King Edward V and his brother Richard, Duke of York.

The institution was dissolved during the reign of King Henry VIII and demolished in the mid-16th century but the name lived on in the precinct where it once stood – during the Elizabethan era it was apparently famous for its lace.

The site of the church was later the site of the General Post Office, built in 1829, which was eventually demolished in 1911 and replaced by a premises located to the west.

The street, which becomes Aldersgate Street in the north and runs into Cheapside in the south, was also once home to the The Bull and Mouth Inn, destroyed in the Great Fire of 1666, and a French Protestant Church. The latter was built in 1842 but demolished in 1888 to make way for more Post Office buildings. 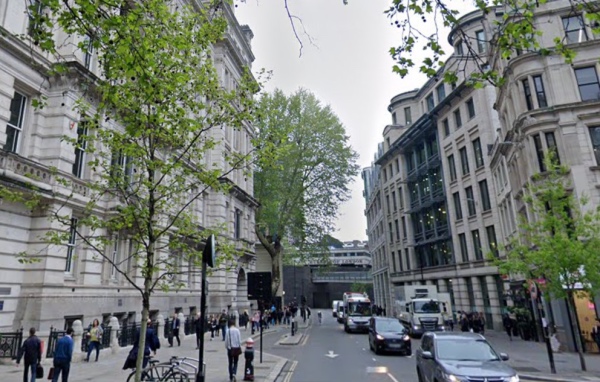 While the history of the General Post Office dates back to the reign of King Charles I, London’s first purpose-built facility for mail was constructed on the east side of St Martins-le-Grand in the 1820s.

The post office headquarters had hitherto been located in the area of Lombard Street but in 1814 it was decided that the site here couldn’t be developed any further. The site in St Martins-le-Grand was subsequently acquired and plans for the building commenced.

Designed by Sir Robert Smirke (famous for his design of the British Museum), the grand structure was built on the site of what were slums between 1825 and 1829 and featured a 400 foot long “Grecian-style” street frontage. The exterior of the building was lit with 1,000 gas burners at night.

As well as serving as the post office’s administrative headquarters, the building also contained the sorting office and the main London public post office. Along with a grand public hall and offices, it contained rooms – including an armoury – for the guards who protected mail coaches and accommodation for clerks charged with receiving foreign mail (obviously at all hours!).

A new building was added to house the telegraph department on the west side of the street in the 1870s and further buildings followed, leading Smirke’s initial building to become known as ‘GPO East’.

In 1910, the facility was bursting at the seams and so the headquarters was moved to the King Edward VII Building. Smirke’s grand building was somewhat controversially demolished in 1912. A fragment – one of the capitals which topped one of the external columns – is apparently located in Vestry Road in Walthamstow.

Before Madame Tussaud arrived in London, there was Mrs Salmon and her famous waxworks, one of several such establishments in London.

First sited at the Sign of the Golden Ball in St Martin’s Le Grand – where it filled six rooms – in 1711, the display was relocated to the north side of Fleet Street where it remained until 1795 when it moved across the road to number 17 Fleet Street, now housing Prince Henry’s Room (pictured, room takes its name from Prince Henry, eldest son of the king, who died at the age of 18 and was apparently the inspiration for an inn which previously occupied the building called The Prince’s Arms).

The waxworks were apparently originally run by Mr Salmon – there are references to him being a “famous waxwork man” – but his wife, Mrs Salmon, continued it alone after his death in 1718 until her own death, variously said to have been in 1760 or as late as 1812. At some point after his death, Mrs Salmon is said to have remarried, to a Mr Steers.

Described in a handbill published soon after its initial move to Fleet Street, the exhibitions were said to include a scene of King Charles I upon the scaffold, another of the ill-fated Queen Boudicea, and more exotic tableaux including one showing Canaannite ladies offering their children in sacrifice to the god Moloch, another of a Turkish seraglio, and another of Margaret, Countess of Heningbergh with the 365 children she is said to have given birth to (all at once!). There was also a mechanised figure of the “famous English prophetess” Old Mother Shipton, who is said to have given a boot to visitors as they left.

While some accounts say the waxworks – which, according to the City of London website remained at the site until 1816 – were taken over by a Chancery Lane surgeon named Clarke after Mrs Salmon’s death (and by his wife after his death), it is also suggested that at some point they moved to Water Lane in east London where they were ruined by thieves.

Whatever its fate, it’s generally accepted that the famous waxworks were visited by the likes of James Boswell and artist William Hogarth. They were also mentioned by author Charles Dickens in David Copperfield.

Originally known as The Bush,  The Lord Raglan pub just to the north of St Paul’s was renamed in the mid 1800s to commemorate one of the heroes of the Battle of Waterloo – the 1st Baron Raglan (1788-1855). 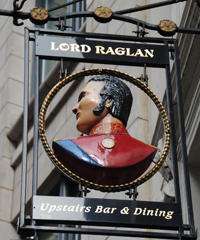 Named the 1st Baron Raglan in 1852, the man previously known as Lord FitzRoy Somerset had lost his right arm at the Battle of Waterloo, fought between the Duke of Wellington and Napoleon on 18th June, 1815, in modern-day Belgium.

His name was subsequently adopted to to describe the ‘Raglan Sleeve’, a type of sleeve which extends as a single piece to the collar and a style which Lord Raglan was said to have favored after his arm was amputated.

Lord Raglan died in 1855 while Commander-in-Chief at the Crimean War. There is a blue plaque commemorating his role in this war on his former house in Stanhope Gate in Mayfair.

The site of the Lord Raglan tavern, 61 St Martin’s Le Grand, is said to be one of the oldest tavern sites in the city, originally dating from about 1779, and while the current building dates from 1855, the cellars are said to be much older and are said to incorporate parts of what was the Roman wall.

For more on the Lord Raglan, see the Taylor Walker website at www.taylor-walker.co.uk/pub/lord-raglan-st-pauls/c1779/.

One of the major thoroughfares of the City of London, the name is reflective of its role as a marketplace with the medieval English word ‘cheap’ generally been taken to mean market.

Starting from the intersection of Newgate Street and St Martin’s Le Grand through to where it runs into Poultry, the street was apparently originally known as Westcheap – Eastcheap is still located down near the Monument. Cheapside’s surrounding streets – including Poultry, Milk Street, and Bread Street give indication of the sorts of goods that were once sold in the area.

Cheapside was, in medieval times, an important street and was on the processional route royalty would have taken from Westminster to the Tower of London. It is the site of St Mary-le-Bow Church (it’s said that if you’re born within hearing of the Bow bells you’re a true Londoner), and, until the Great Fire of 1666, the eastern end of Cheapside was the site of the end of the Great Conduit where water arrived after being piped in from the Tyburn River in the west.

Key figures associated with Cheapside include slain Archbishop of Canterbury Thomas Becket, born there in 1118, poet John Milton, born on the adjoining Bread Street in 1608, and writer Geoffrey Chaucer. A glimpse into the street’s past was found in 1912 when the Cheapside Hoard was unearthed during the demolition of a building there (you can see our earlier post on that here).

The area was heavily bombed during World War II.

Lined with shops, restaurants and office buildings, Cheapside today remains close to the heart of the city and is currently undergoing significant redevelopment, the recently opened swanky shopping centre at One New Change being an example.