• A new gallery opens today in the restored Cumberland Suite at Hampton Court Palace. The Gothic Revival suite of rooms, designed by William Kent for William Augustus, Duke of Cumberland and the youngest son of King George II, were the last major royal commission ever undertaken at the palace. They will now house a selection of the Royal Collection’s finest paintings including masterpieces by Holbein, Van Dyck, Rembrandt, Caravaggio, Bassano and Gainsborough. The restoration followed two years of research aimed at returning the rooms to a state which as closely as possible represents Kent’s original decorative scheme. One of the rooms – the duke’s large light closet – is being opened to the public for the first time in 25 years and will house 12 of Canaletto’s smaller Grand Canal views of Venice. Admission charge applies. For more, see www.hrp.org.uk/HamptonCourtPalace/. 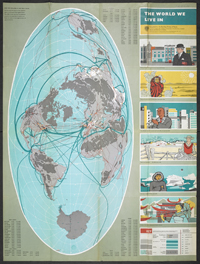 • The exploration of the Northwest Passage is the subject of a new exhibition which has opened at the British Library in King’s Cross. Lines in the Ice: Seeking the Northwest Passage looks back over 400 years with exhibits including King Charles II’s personal atlas, 19th century woodcut illustrations and wooden maps made by Inuit communities, and artefacts related to three of the most eminent explorer to seek out the Northwest Passage – Martin Frobisher, Sir John Franklin and Roald Amundsen, the first man to reach the South Pole. The exhibition has opened just weeks after the discovery of the HMS Erebus, one of Sir John Franklin’s lost ships. There’s a full programme of events to accompany the exhibition. Runs until 29th March. Admission is free. For more, see www.bl.uk. PICTURE: The world we live in, c. 1958, on display in Lines in the Ice. Courtesy of British Library.

• Celebrate Winston Churchill’s birthday at a special after-hours event in the Churchill War Rooms in Whitehall next week. Advance booking is required to buy tickets for the event which will include a silent disco, drink tasting workshops and the chance to strike your best Churchill pose in a special photo booth. The event runs on the evening of 27th November. To book, head to www.iwm.org.uk/events/churchill-war-rooms/lates-at-churchill-war-rooms-churchill-s-birthday.