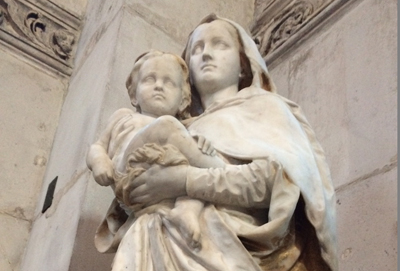 This Victorian-era marble statue of the Virgin and Child has gone back on show in St Paul’s Cathedral more than 70 years after it taken down following bombing during World War II. Part of an ornate high altar and reredos installed at the cathedral’s east end in 1888, the statue – the work of Thomas Garner – was put into storage after that part of the cathedral took a direct hit during the Blitz of 1940 and what remained of the altar was dismantled (the statue and a crucifix were the only parts retained by the cathedral). It can now be seen in the Chapel of St Erkenwald and St Ethelburga (also known as the Middlesex Chapel) in the north transept. For more, see www.stpauls.co.uk. PICTURE: The Chapter of St Paul’s Cathedral.