We started this series with a pyramidal-shaped structure (see A pyramid in Trafalgar Square), so we thought it only fitting that we end with one as well. 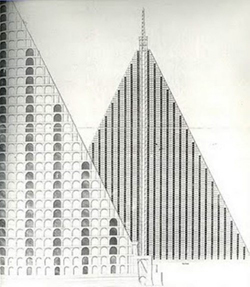 This time, it’s not so much a monument, however, as a place to house some of London’s ever increasing population of dead.  The over-crowded graveyards of early Victorian London (and the horror stories that went with them of bodies bursting forth from their graves), led to proposals for a range of innovative solutions in the early nineteenth century.

Among them was a pyramidal-shaped necropolis for Primrose Hill. Architect Thomas Willson came up with the 94 storey-high structure – which would have stood higher than St Paul’s Cathedral – to provide storage for some five million corpses with steam-powered lifts to carry the bodies to their place of rest.

Made from brick with granite facings, the base of the vast structure would have covered 18 acres. Its design, which included quarters for staff, four entrances and a central ventilation shaft, drew upon the Victorian fascination for all things Egyptian.

“It was supposed to be compact, hygienic and ornamental,” author Catharine Arnold told the BBC. “Willson hoped people would come to admire this huge pyramid from far and wide, picnicking on Primrose Hill and enjoying this splendid monument. But it would be rather like a giant car-park of the dead.”

According to the prospectus Willson, who trained at the Royal Academy, issued for potential investors, the pyramid – which was to cost £2,500 to build – would have raised a staggering sum of more than £10 million in profit when it was full.

Still, it was not to be and the idea never left the drawing board. But Willson did go on to join the board of the General Cemetery Company.

For more on London and its dead, see Catharine Arnold’s Necropolis: London and Its Dead