Famed for its market, the area around the southern end of London Bridge is generally simply known as Borough. But that’s just an abbreviation – Borough is actually a contracted version of Borough of Southwark. 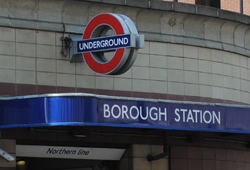 The origins of the word borough come from the Old English burh, a word which originally simply referred to a ‘fortified place’ and, in this case, referred to the settlement which, since Roman times, had grown up outside the city walls around the southern approaches to London Bridge.

It later came to mean a town with its own locally-based government and, according to Cyril M Harris in What’s In A Name?, Southwark was, in the later Middle Ages, the only London borough outside the City Wall which had its own MP.

The fact that the borough was outside City jurisdiction meant it become a popular place for inns, theatres and other forms of entertainment including the infamous Southwark Fair.

Although ‘Borough’ can still be used as an alternative word for the entire Borough of Southwark, these days when people refer to ‘The Borough’, they’re often referring to just a small district of the much larger borough.

While it’s hard to get a fix on exactly where the boundaries of this district are, at the heart of this area is Borough High Street and landmarks particularly associated with it include the Borough Market (see our earlier post here) as well as Southwark Cathedral and the galleried George Inn as well as the Church of St George The Martyr (and, of course, its own Tube station, which opened in 1890).