Now the name of a dock on Bankside (pictured below), St Mary Overie (also spelt as Overy) also forms part of the formal name of Southwark Cathedral, more properly known as The Cathedral and Collegiate Church of St Saviour and St Mary Overie. 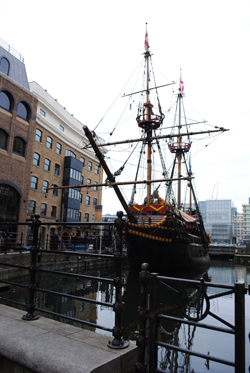 The simple version of the name’s origins is that it simply means St Mary “over the river” (that is, St Mary on the south side of the Thames) which was used in relation to a priory founded there in the Norman era by two knights (it’s to this foundation that what is now Southwark Cathedral owes its origins, something we’ll take a more detailed look at the nunnery in an upcoming Lost London post).

But there’s also another, more romantic version, of the name’s origins. That story, as it’s told on a plaque located at the dock (pictured above), goes back to before the Norman founding of priory, back to the days when, before the building of London Bridge, a ferry ran between the two banks of the River Thames.

The man responsible for the ferry was John Overs, a “notorious miser”, who decided to save money by feigning his death and thus plunging his household into mourning, saving that day’s provisions. As one may imagine, however, Overs was not a popular man and his servants, instead of fasting in their mourning, held a feast in celebration of his death.

In rage, the old master leapt out of his bed and a servant, terrified and imaging some sort of demonic manifestation, struck him fatally with an oar on the head.

Overs’ daughter, Mary, sent for her lover so that he may come and together with her claim her father’s inheritance but such was his haste, he fell from his horse and broke his neck. So overcome was Mary by her misfortunes that she founded a convent into which she subsequently retired (this was subsequently ‘refounded’ by the two Norman knights).

The dock, meanwhile, is today the berthing place of the Golden Hinde II, a sea-worthy replica of the flagship in which Elizabethan explorer Sir Francis Drake circumnavigated the globe (for more on the ship, see our earlier post here).

Famed for its market, the area around the southern end of London Bridge is generally simply known as Borough. But that’s just an abbreviation – Borough is actually a contracted version of Borough of Southwark.

The origins of the word borough come from the Old English burh, a word which originally simply referred to a ‘fortified place’ and, in this case, referred to the settlement which, since Roman times, had grown up outside the city walls around the southern approaches to London Bridge.

It later came to mean a town with its own locally-based government and, according to Cyril M Harris in What’s In A Name?, Southwark was, in the later Middle Ages, the only London borough outside the City Wall which had its own MP.

The fact that the borough was outside City jurisdiction meant it become a popular place for inns, theatres and other forms of entertainment including the infamous Southwark Fair.

Although ‘Borough’ can still be used as an alternative word for the entire Borough of Southwark, these days when people refer to ‘The Borough’, they’re often referring to just a small district of the much larger borough.

While it’s hard to get a fix on exactly where the boundaries of this district are, at the heart of this area is Borough High Street and landmarks particularly associated with it include the Borough Market (see our earlier post here) as well as Southwark Cathedral and the galleried George Inn as well as the Church of St George The Martyr (and, of course, its own Tube station, which opened in 1890).

Located close to the Bankside theatres where William Shakespeare’s plays would have been performed, Southwark Cathedral – known then as St Saviour’s Church – has plenty of connections to the Elizabethan theatre world. 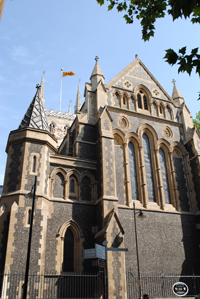 Not only was the Bard’s youngest brother, the actor Edmund, buried here in 1607 (the grave is unmarked but there’s a commemorative stone in the floor of the choir), the playwrights John Fletcher and Philip Massinger and theatre owner Phillip Henslowe were also buried here. And like them, another theatre owner (and Henslowe’s son-in-law), Edward Alleyne, also held positions at the church.

The cathedral has several memorials to Shakespeare. These include a memorial window in the south aisle – unveiled in April 1954 on the anniversary of Shakespeare’s death, it depicts characters from some of his works and was designed by Christopher Webb to replace an earlier window which had been destroyed during World War II. Below it is an alabaster reclining figure of the playwright set against a relief of Southwark as it appeared during the 17th century. Carved by Henry McCarthy, it was unveiled in 1912.

The history of the church is believed to go back to at least Saxon times. Between 1106 and 1538, it served as the church of the Augustinian Southwark Priory and was dedicated to St Mary Overie. Following the Dissolution in the mid 16th century was re-dedicated as the parish church of St Saviour’s. It only became a cathedral in 1905 with the creation of the Diocese of Southwark. While some scant parts of the building date back to the 12th century  (the church was rebuilt after a fire in the 13th century), much of it has been altered.

In the first of a new series looking at some of London’s most historic markets, we take a look at the history of Borough Market in Southwark, now the city’s most famous food market.

The origins of a food market in the area go back to at least to the reign of the Anglo-Saxon King Ethelred the Unready in early 11th century (some have suggested as far back as Roman times) with food vendors clustering around the southern end of London Bridge. The market was relocated to Borough High Street in the 1200s.

In 1755, traffic congestion saw Parliament close the market but Southwark residents raised £6,000 and bought a small area of land known as The Triangle – once part of the churchyard of the now long gone church of St Margaret’s – and reopened the market there.

The Triangle still remains at the heart of the market which sits partly under railway arches just to the south of the Southwark Cathedral churchyard. New market buildings were constructed in the mid 1800s but deemed “impractical”, they were replaced by new buildings in the late 1800s and 1930s (the latter was when the art deco entrance on Borough High Street was erected).

The market was refurbished in 2001 and the ornate Grade II-listed Floral Hall, which was originally the south portico on the Floral Hall at Covent Garden (taken down to make way for the Royal Opera House), was installed in 2003.

There are now more than 100 stalls in the wholesale and retail food market, making it one of the largest in London. It is owned by a charitable trust, The Borough Market (Southwark), with the volunteer trustees all local residents. Sections in the market include the Jubilee Market and the Green Market and a blue plaque, declaring the market London’s “oldest fruit and veg market”, was installed by Southwark Council earlier this year.

The amazing variety fine food on offer will tempt even the most jaded of palates but be warned that you have to queue as it can get a little packed with tourists at lunchtimes!

WHERE: 8 Southwark Street (nearest Tube Stations are London Bridge or Borough); WHEN: 10am to 3pm Monday to Wednesday, 11am to 5pm Thursday, 12pm to 6pm Friday, and, 8am to 5pm Saturday; COST: Free entry; WEBSITE: www.boroughmarket.org.uk

One of those somewhat confusing placenames where the ‘w’ is effectively silent, Southwark (pronounced something like Suh-thuck) is a sizeable district south of the River Thames and one of the city’s oldest areas.

The area, which was settled as far back as Saxon times, takes its name from the Old English words suth or sud weorc which translates as “southern defensive work” and relates to the fact that the site is south of the City of London and at the southern end of London Bridge (the first bridge here was built by the Romans). While it was this name which was recorded in the Domesday Book of 1086, in the 900s the area was recorded as Suthriganaweorc which meant ‘fort of the men of Surrey’.

The name Southwark was also applied to borough which sat south of the river and still exists today – the Borough of Southwark. This in turn became shortened to just Borough, hence the name borough still exists as an alternative for part of Southwark even today (think of Borough Market and Borough High Street).

Part of Roman Londinium, Southwark was effectively abandoned after the end of Roman rule and then reoccupied by Saxons in the late 800s when the ‘burh’ (borough) of Southwark was created. It developed considerably in the medieval period and became known for its inns (think of the pilgrim inn, The Tabard, in The Canterbury Tales).

The area, particularly Bankside – part of the Borough of Southwark, also become known as an entertainment district with theatres and bear-baiting pits as well as a red-light district. It was also known for its prisons, in particular The Clink (controlled by the Bishop of Winchester), Marshalsea and the King’s Bench.

The area was also a centre of industry – everything from brewing to tanning – and came to boast numerous docks and warehouses (when it also became a centre of the food processing industry). With the closure of the docks, it’s retail, tourism, creative industries and the financial services which are dominant in the area today.

Landmarks are many thanks to the area’s long and colorful history (far too many to list in this short piece) but among major sites are Southwark Cathedral, Borough Market, and the George Inn as well as the Old Operating Theatre, Guy’s Hospital, and a replica of Sir Francis Drake’s ship, the Golden Hinde. Personalities associated with the area (again far too many to list here) include Geoffrey Chaucer, William Shakespeare and Charles Dickens.

For more, check out Southwark: A History of Bankside, Bermondsey and the Borough

London has a plethora of markets selling everything from fresh flowers to antiques and clothes. For food, it’s hard to beat Borough Market. Located next to Southwark Cathedral on the south bank of the Thames, the market stalls are contained in a maze of passageways which, when it’s in full swing, buzz with excitement and color.

With about 130 individual stalls, there’s everything here you could want – fresh seafood and meats, fruit and vegetables, cheeses and dairy products and all the cakes and pastries you could want as well as a range of alcoholic drinks.

It’s a great place to do some shopping but equally good as a place to duck in for lunch – the Boston Sausage Company’s sausages make for a great bite on the run or to eat while sitting in the cathedral grounds watching the passersby.

WHERE: Between the Thames River and Borough High Street, Southwark. Nearest tube is London Bridge or Borough.  WHEN: Thursdays, Fridays and Saturdays; COST: Free to enter; WEBSITE: www.boroughmarket.org.uk