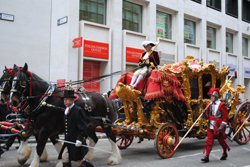 • The Lord Mayor’s Show will mark its 800th anniversary on Saturday as the newly elected Jeffrey Mountevans – the 688th Lord Mayor of the City of London – makes his way through the City to Westminster to swear loyalty to the Crown. The procession of 7,000 people, some 180 horses and 140 vehicles will set off on its way along a three-and-a-half mile route at 11am, starting at Mansion House and traveling down Cheapside to pause at St Paul’s Cathedral (which is open for free all day) before heading on via Ludgate Hill and Fleet Street to the Royal Courts of Justice before returning the City via Queen Victoria Street from 1.10pm. In a special nod to the 800th anniversary, the famous bells of St Mary-le-Bow will ring out a special 800-change at noon. The day will conclude with fireworks over the River Thames kicking off at 5.15pm (for the best view head down to the riverside between Waterloo and Blackfriars Bridges, either on Victoria Embankment or on the South Bank). The show’s origins go back to 1215 when, in exchange for a Royal Charter granting the City of London the right to elect its own mayor, King John insisted the newly elected mayor travelled to Westminster each year to swear loyalty to the Crown. For more (including a map to print out), see https://lordmayorsshow.london. PICTURE: From a previous show.

• Vermeer’s The Music Lesson is among 27 of the finest 17th and 18th century Dutch paintings in the Royal Collection which will go on display in a new exhibition at the Queen’s Gallery at Buckingham Palace from tomorrow. Masters of the Everyday: Dutch Artists in the Age of Vermeer also features works by the likes of Gerrit Dou, Pieter de Hooch and Jan Steen, all produced during what is known as the Dutch ‘Golden Age’. The exhibition is being shown alongside another display – High Spirits: The Comic Art of Thomas Rowlandson – which will focus on the work of 18th and early 19th century caricaturist Thomas Rowlandson. Around 100 of Rowlandson’s works feature in the display with highlights including The Two Kings of Terror featuring Napoleon and Death sitting face-to-face after Napoleon’s defeat at Leipzig in 1813, The Devonshire, or Most Approved Method of Securing Votes depicting Georgiana, Duchess of Devonshire, kissing a butcher (it was claimed she had claimed kisses for votes in the Westminster election of 1784), and A York Address to the Whale. Caught lately off Gravesend in which the Duke of York thanks a whale for distracting attention from accusations that his mistress was paid by army officers to secure promotions from the Duke. Admission charge applies. Both exhibitions run until 14th February, 2015. For more, see www.royalcollection.org.uk.

• The first major UK exhibition of the works of kinetic sculpture pioneer Alexander Calder opened at the Tate Modern this week. Alexander Calder: Performing Sculpture features more than 100 of the ground-breaking 20th century artist’s works which trace how Calder turned sculpture from the idea of a static object to a continually changing work to be experienced in real time. Works on show include figurative wire portraits of artists – Joan Miró and Fernand Léger (both 1930), works exploring the idea of forms in space – Red Panel, White Panel and Snake and the Cross (1936), motorised mobiles such as Black Frame and A Universe (1934), and chiming mobiles such as Red Gongs (1950) and Streetcar (1951). It closes with the large scale Black Widow (c.1948), shown for the first time ever outside Brazil. Runs until 3rd April. Admission charge applies. For more, see www.tate.org.uk.