Albury Street in Deptford, 1911. The image, taken by the London County Council, is just one of thousands which form part of a new free, online resource, Collage – The London Picture Archive. The world’s largest collection of images of London, the archive contains more than 250,000 images of London spanning the period from 1450 to the present day. It includes more than 8,000 historical photographs of life on the capital’s streets as well as major events – everything from the Great Fire of London in 1666 to the construction of Tower Bridge in the late 19th century. The photographs, maps, prints, paintings and films in the collection are all drawn from the collections of the City of London Corporation’s Guildhall Art Gallery and the London Metropolitan Archives in Clerkenwell. Other images shown here include (above right) ‘Street Life in London’, 1877 (taken by Adolphe Smith and John Thomson, this image was an early use of photography); (below) ‘Construction of the Metropolitan Railway (the first tube line)’, 1862 (taken at King’s Cross Station); and (far below), ‘The Construction of Tower Bridge’, 1891-1892 (taken from Tower Embankment). Collage – The London Picture Archive is free to access and available at www.collage.cityoflondon.gov.uk. 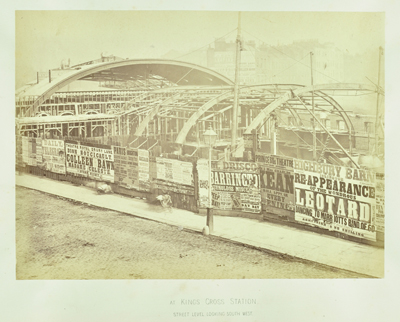