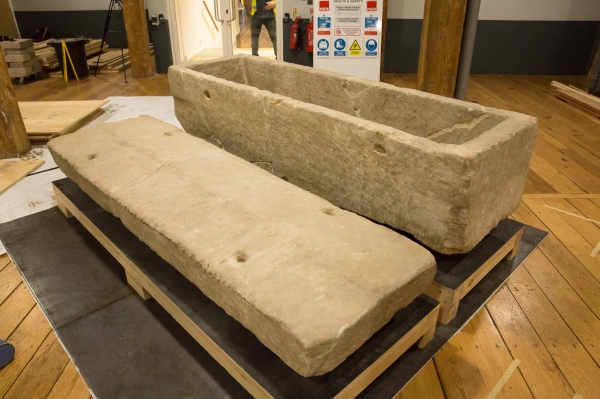 Excavated in a dig in Southwark during the summer of 2017, this Roman sarcophagus is now at the centre of a new exhibition, Roman Dead, at the Museum of London Docklands. 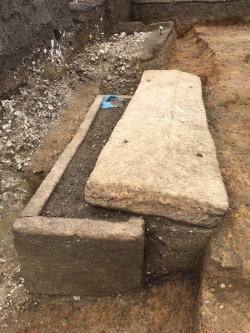 The site of the find, on the corner of Harper Road and Swan Street in Borough, is located in what is known as the ‘Southern Cemetery’, one of a number of distinct burial grounds located on the outskirts of the Roman city of Londinium. Some 500 Roman burials have been found in the southern site but the stone sarcophagus was the first discovery of its kind there.

The 1,600-year-old sarcophagus measures approximately 2.4 metres long, 75cm wide and 65 centimetres high. The lid of the coffin had been partly pushed to one side, indicating that it may have been disturbed by grave robbers during the 18th century. The interior was left partly filled with soil and small bones and a damaged Roman bracelet were found nearby – a possible indication that it was a child buried there.

Gillian King, senior planner for archaeology at Southwark Council, told the BBC at the time of the find that the grave owner must have been “very wealthy and have had a lot of social status to be honoured with not just a sarcophagus, but one that was built into the walls of a mausoleum”.

The sarcophagus is only the third to be discovered in London – one was discovered at St Martin-in-the-Fields near Trafalgar Square in 2006 and another in Spitalfields in 1999.

Roman Dead is running at the Museum of London Docklands until 28th October. Admission is free. For more, see www.museumoflondon.org.uk/museum-london-docklands.