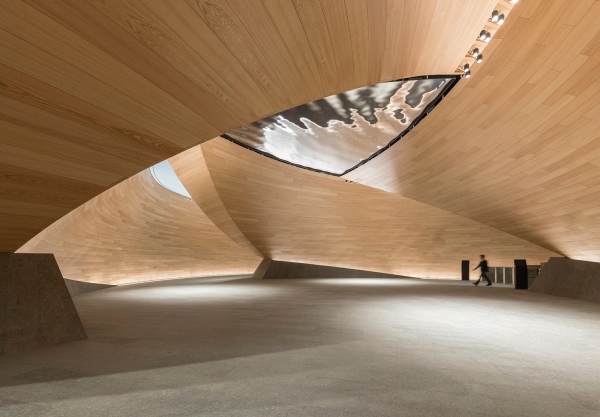 • More than 800 buildings of all kinds open their doors to the public this weekend as part of the 26th Open House London. Highlights of this year’s event include new entries such as the US Embassy, the Royal Opera House and Bloomberg’s new HQ as well as returning favourites such as the BT Tower, The Shard and 10 Downing Street. There’s also a programme of activities “lifting the lid” of Old Oak and Park Royal – the heart of ‘making’ in London, explorations of new London districts such as Wembley Park, Hackney Wick and Barking Riverside, the chance to view RIBA Award-winners including the Belvue School Woodland Classrooms, Hackney Town Hall and No.1 New Oxford Street, the new COS HQ, and 100 “must-see” homes. The full programme of events – which also highlights the contribution women have made in shaping today’s London – can be found at www.openhouselondon.org.uk and there’s a free app to download. PICTURED: Top – Bloomberg European Headquarters (Nigel Young/Foster + Partners) and right – Valetta House (French & Tye) are among properties open to the public.

• A multi-screen art installation remembering the millions of African men and women who served in World War I and an immersive sound installation featuring personal reflections on the Armistice are among four exhibitions opening at the Imperial War Museum in Lambeth on Friday. Projected onto three screens, African Soldier combines a powerful sound score, historic footage and newly created film which has been shot by artist John Akomfrah in various locations around the world to speak to the African experience of World War I while the sound installation, I Was There: Room of Voices, features 32 people who fought and lived through war sharing their personal stories of the Armistice. The exhibitions also include Renewal: Life after the First World War in Photographs – a display of more than 100 black and white photographs showing how lives, landscapes and national identities recovered, evolved and flourished after the war – and Moments of Silence, an immersive installation commissioned from 59 Productions. The exhibitions, which can be seen until 31st March, are part of the IWM’s Making A New World, “a season of art, photography, film, live music, dance and conversations exploring how the First World War has shaped today’s society”. For more see www.iwm.org.uk.

• The role of science in the lives – and deaths – of the last Russian Tsar, Nicholas II, and his family is explored in a new exhibition opening at the Science Museum in South Kensington which marks 100 years since the end of the Romanov dynasty. The Last Tsar: Blood and Revolution explores the influence of medicine on the Imperial Family –  everything from how they treated conditions such as the heir Alexei’s haemophilia through to the Tsarina’s fertility and the Red Cross medical training the Tsar’s daughters received – as well as recent advances in medicine and forensic science which have been deployed to transform the investigation into their disappearance. Objects on show include personal diaries, an Imperial Fabergé Egg presented to the Tsar by his wife a year before the fall of the Imperial house and photograph albums created by an  English tutor to the Imperial Family. There’s also evidence from the scene of the family’s execution including the dentures of the Imperial physician, a diamond earring belonging to the Tsarina and an icon peppered with bullet holes. Opening on Friday, the exhibition runs until 24th March. For more, see www.sciencemuseum.org.uk/thelasttsar.