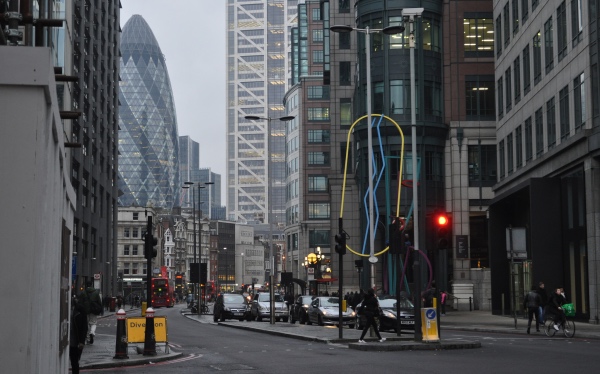 Located at what’s now the junction with Wormwood Street (and marked by a mitre which appears on a building there), the gate was the departure point for Ermine Street which ran from London to Lincoln and York. 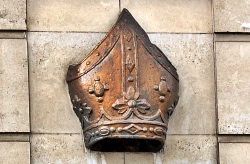 The gate and hence the road – which runs northward from the intersection of Gracechurch Street and Cornhill to where it becomes Norton Folgate Street (which links into Shoreditch High Street) – is believed to have been named for the 7th century Bishop Erkenwald (Earconwald). It was he who apparently first ordered its reconstruction on the site of a former Roman gate.

By Tudor times, the street had become known for the mansions of rich merchants – among those who had their homes here were Sir Thomas Gresham, Sir John Crosby and Sir Paul Pindar (Crosby Hall was later re-erected in Chelsea and the facade of Sir Paul Pindar’s house, is in the V&A). The street also become known for its many great coaching inns, all of which were eventually demolished.

Bishopsgate was the first street in London to have gas lighting when it was introduced about 1810 and, about 1932, became the first in Europe to have automated traffic lights (at the junction with Cornhill).

The City of London ward straddles the site of the old London wall and gate and is accordingly divided into “within” and “without” sections.

The name Bishopsgate is also synonymous with an IRA truck bombing which took place in the street on 24th April, 1993, in which one man was killed and 44 injured.

One thought on “What’s in a name?…Bishopsgate…”