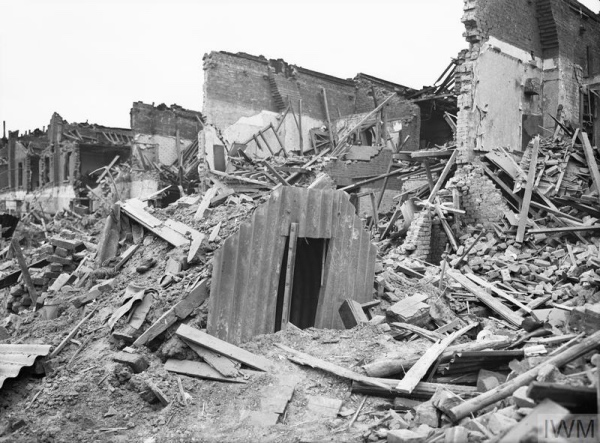 A small air raid shelter designed for people to erect on their properties in preparation for the expected bombing campaigns of World War II, the first of London’s ‘Anderson’ shelters were rolled out 80 years ago in a backyard garden of a house in Islington on 25th February, 1939.

The shelter’s name comes from Sir John Anderson, Lord Privy Seal and the man tasked with the job of overseeing air-raid preparations across the country. As part of that job, he commissioned engineers to come up with an easy-to-construct, affordable shelter that could be used by the population at large.

The resulting arched-roofed structures, designed to be flexible and absorb the impact when bombs hit, were made from six curved sheets of corrugated steel or iron and, at six feet tall, 6.5 feet long and 4.5 feet wide, could house a family of six. They were designed to be buried under four feet of earth in backyards and the roof covered with a minimum of 15 inches of soil.

The shelters were given out for free to lower income families but those with the means had to buy them for £7. Some chose to incorporate them into their gardens and grew vegetables and plants on top and some decorated them – there were even competitions held for the best looking.

By the time bombs started hitting London in the Blitz, more than 1.5 million of the shelters had been built (and a further 2.1 million were erected as the war raged).

It was expected that families would use them every night but the shelters were found to be cold and damp and often flooded which meant many people only used them when air raid sirens sounded (and some not even then – one 1940 survey apparently found only 27 per cent of Londoners used them).

After the war, most were scrapped for the metal but some of the Anderson shelters were repurposed as garden sheds. A small number of them survive across London.

PICTURE: An intact Anderson shelter sits amid devastation in Poplar caused after a land mine fell a few yards away in in 1941. The three people inside were not hurt. Via Imperial War Museum (© IWM (D 5949))