This marks the 100th anniversary – last month in fact – of the entry of the first woman to the British Parliament. 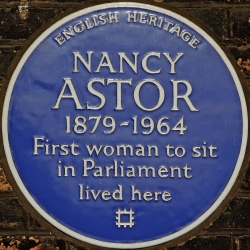 Nancy Astor, who won the seat of Plymouth Sutton on 15th November, 1919, took her seat in Parliament two weeks later on 1st December, about a year after women won the right to stand as an MP.

Astor, whose husband, Waldorf Astor, had previously occupied her seat (but whose seat became vacant when he was elevated to the House of Lords following the death of his father, Viscount Astor), was the first to take her seat in the House of Commons but not the first elected.

That honour goes to Constance Markiewicz, who won for Sinn Fein in 1918 – while she was detained in Holloway Prison – and who never took her seat in the House of Commons.

The American-born Astor met with a somewhat hostile reception from some – Winston Churchill famously told her MPs had hoped to “freeze her out”.

She delivered her maiden speech on 24th February, 1920, warning the MPs that given some women aged over 30 could now vote, they intended to use it and “use it wisely”.

Astor ended up winning seven elections and, despite being seen increasingly as a figure of controversy in part because of her support – along with her husbands and their associates – of Neville Chamberlain’s policy of appeasement with Germany in the lead-up to World War II, remained MP for Plymouth Sutton until 1945.

She decided not to stand again based on the advice of the Conservative Party – who saw her increasingly as a liability, and her husband.