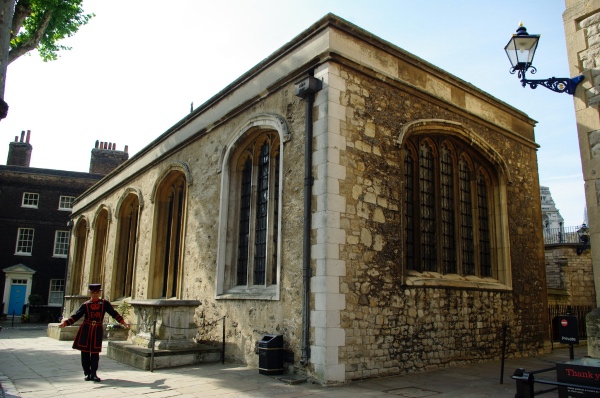 The remains of an adult female and a young child have been discovered beneath the floor of one of the entrances to the Chapel of St Peter ad Vincula in the Tower of London. Discovered as part of early investigations aimed at enabling better disabled access to the chapel, the two skeletons – the first complete skeletons found at the Tower since the 1970s – were found lying face up with their feet facing east, typical of a Christian burial. The adult, believed to be aged 35 to 45, is believed to have been buried within a coffin (coffin nails were present) while the child, believed to be aged about seven, was simply wrapped in a blanket – typical of later medieval and early Tudor burials – and due to that and further materials and artefacts uncovers, it is believed the two people were laid to rest between 1450 and 1550, a period between the Wars of the Roses and the reign of King Edward VI. The remains were reinterred in the chapel in a special ceremony conducted by the Tower of London’s chaplain, Rev Canon Roger Hall. The Chapel Royal was completed in 1520 and is perhaps most famed for being the burial place of two of King Henry VIII’s wives, Anne Boleyn and Catherine Howard. The discovery was explored in the the final episode of Inside the Tower of London which aired on Channel 5 in October.