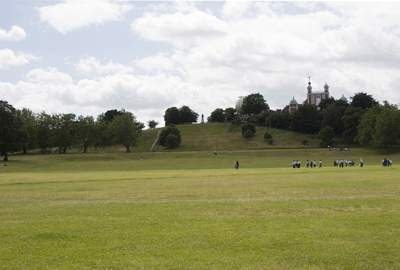 The remains of the 17th century Old Keeper’s Cottage in Greenwich Park are being brought to light in an archaeological dig underway in the park this week. The lodge stood close to Queen Elizabeth’s Oak near the centre of the park and was demolished in 1853. This year’s dig is the final of a three year project to unearth the lodge’s remains, sparked after tiles were discovered near the site of the cottage in 2010. Finds so far include a second century Roman brooch, post-medieval pottery and a Victorian watch-winder. The digs have also revealed remains associated with the lodge including two buildings and part of the boundary of the complex. Toni Assirati, head of education and community engagement at Royal Parks, says while much is already known about the history of Greenwich Park – which dates back to 1427 – much remains to be yet discovered about its social history. “This project will hopefully help us find out more about the lives of the people who worked and lived in the park.” Members of the public are invited to attend from 3pm to 6pm on 13th July to hear more about the project from the archaeologists involved as well as see some of the unearthed artefacts. For more about Greenwich Park, see our earlier post here or head to www.royalparks.org.uk/parks/greenwich-park. PICTURE: Greenwich Park, looking toward Observatory Hill (the site of the dig is to the left of the hill). © Anne Marie Briscombe/Royal Parks.