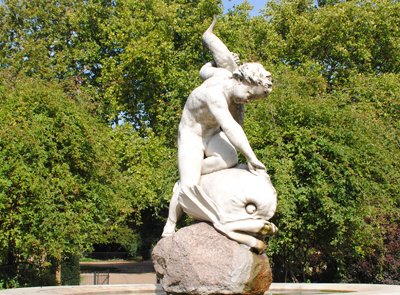 Can you identify where in London this picture was taken and what it’s of? If you think you can, leave a comment below. We’ll reveal the answer early next week. Good luck!

Well done to Renate, John, Diego and José who all correctly named this as the Boy with a Dolphin fountain in Hyde Park’s Rose Garden. The fountain, which is the work of Alexander Munro and dates from 1862, was once the centrepiece of the Victoria-era sunken garden which stood on the site of a former reservoir but was removed to make way for the widening of Park Lane. The fountain was moved to The Regent’s Park in 1960 but returned to Hyde Park in 1995. The Rose Garden, located close to Hyde Park Corner, also contains an older fountain – the Artemis Fountain, which dates from 1822.