• A new exhibition charting the history of Henry Moore’s sculpture, Draped Seated Woman (known affectionately as Old Flo), has opened at Canary Wharf. Indomitable Spirit features traces the creation of the 2.5 metre high bronze sculpture in 1957-58, its placement in 1962 on the Stafford Estate in Stepney, and, in 1997, its removal to the Yorkshire Sculpture Park where it has spent the last 20 years before returning to the East End – this time Cabot Square – last year.  It also explores the artist’s life, career and legacy and the reasons as to why Old Flo – part of an edition of six sculptures – became such an important feature in the East End. The exhibition can be seen in the lobby of One Canada Square until 6th April. Admission is free. For more, see www.canarywharf.com. PICTURE: Henry Moore’s ‘Draped Seated Woman’, Canary Wharf.

• The first of two Peter Pan-themed weekends kicks off at the Museum of London Docklands this Saturday. Adventures in Peter Pan’s Neverland features a series of interactive events film screenings and performances across the weekend with professional character actors leading workshops and re-enacting short scenes from the story. There will also be “sightings” of Captain Hook’s pirates and other characters and two screenings of the classic animated film Peter Pan each day. Money will be raised for Great Ormond Street Hospital Children’s Charity through donations on ticket sales and other fundraising activities during the event. Runs from 10.45am to 4pm this Saturday and Sunday and again on 3rd and 4th March. Tickets start at £4. For more, see www.museumoflondon.org.uk. 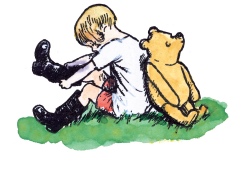 • On Now: Winner-the-Pooh: Exploring a Classic. This exhibition at the V&A, which is closing on 8th April, features original drawings by EH Shepard – on show in the UK for the first time – created to illustrate AA Milne’s classic tale and, as well as examining Milne’s story-telling techniques and Shepard’s illustrative style, takes a look at the real people, relationships and inspirations behind the bear’s creation. Around 230 objects are featured in the display and as well as original manuscripts, illustrations, proofs and early editions, they include letters, photographs, cartoons, ceramics, fashion and video and audio clips, with the latter including a 1929 recording of Milne reading Winnie-the-Pooh). Other highlights include Milne’s Winnie-the-Pooh manuscript and pages from the manuscript of House at Pooh Corner as well as Shepard’s first character portraits of Winnie and Christopher Robin nursery tea set which was presented to then-Princess Elizabeth in 1928. Admission charge applies. For more see, www.vam.ac.uk/winniethepooh. PICTURE: Line block print, hand coloured by E.H. Shepard, 1970, © Egmont, reproduced with permission from the Shepard Trust

Couple on seat, Cabot Square, Canary Wharf. The much wondered at (who are the couple?; why do their heads have such odd shapes?) bronze sculpture is by Lynn Chadwick (2000).