One of the more well-known street markets of London, there has been a market operating in Petticoat Lane (later known as Middlesex Street) in East London since the 17th century. 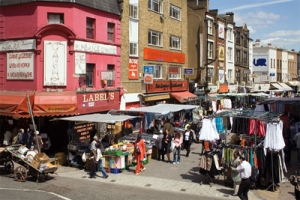 The market – which lies in relatively close proximity to the Columbia Road Flower Market and Old Spitalfields Market as well as Brick Lane – started to emerge in the early 1600s as a place where clothes were traded and received a boost with the arrival of Huguenot silk weavers who settled in the area later that century having fled religious persecution in the continent (it’s believed the lane was named after the silk petticoats which were sold here).

During the 1800s the area become renowned as the centre of the clothes manufacturing trade and the market was the place to buy the clothes. Around 1830, the name of the street was changed from Petticoat Lane to Middlesex Street after some sensibilities were offended that the street was named after unmentionables.

In the late 19th and early 20th centuries, the market became dominated by Jewish traders who had arrived in London, like the Huguenots before them, fleeing persecution in Europe. They added new life to the market and maintained the coster traditions.

Like many other street markets in London, the market didn’t get formal approval until quite late in life – only in 1936 was it was protected by an Act of Parliament.

These days the market – one of 1o managed by the London Borough of Tower Hamlets in whose jurisdiction the majority of the market lies – occupies the lanes and streets centring on Middlesex Street including Cobb Street, Goulston Street and Wentworth Street (which has long had a street market in its own right). It is open weekdays as well as Sunday when there are more than 1,000 stalls selling everything from clothes to CDs, books and artwork.

WHERE: Middlesex Street (nearest Tube stations are Aldgate, Aldgate East and Liverpool Street); WHEN: 10am to 4pm, Monday to Friday and 9am to 3pm Sunday; COST: Free.