More correctly known as the crypt of the Priory of the Order of St John of Jerusalem, this subterranean chamber dates from the 12th century and is the oldest surviving part of what remains of the priory.

Based close to St John’s Gate in Clerkenwell – another surviving section of the monastery, the partly Romanesque crypt features some magnificent 16th century monuments including the rather skeletal-looking funeral effigy of the last prior, Sir William Weston, who apparently died on the very day the priory was dissolved in May, 1540 (he apparently collapsed on hearing the news).

The crypt also contains a 16th century tomb effigy (pictured below) believed to be that of Don Juan Ruiz de Vergara, a Castilian Knight Hospitaller who died fighting the Turks at sea off the coast of Marseilles (it had apparently formerly been located in Valladolid Cathedral in Spain and was donated by a member of the order (and first Keeper of the London Museum, now known as the Museum of London), Sir Guy Francis Laking, in 1915). Understood to have been the work of Esteban Jordan, sculptor to King Philip II of Spain, the knight bears the eight pointed star of the order on his breastplate.

Meanwhile, the stained glass in the crypt chapel’s east lights depict the entombment of Christ as well as Raymond du Puy (Grand Master of the Order of St John from 1118–60), St John the Baptist and St Ubaldesca. Other stained glass windows in the chapel depict saints like St George, Andrew, Patrick and David and some of the English branch’s priors and knights.

Other items of interest in the crypt include a 13th century font, originally from a church in Buckinghamshire, and a stone fragment from the pavement of the Grotto of the Nativity at Bethlehem.

The priory once served as the English headquarters for Order of St John of Jerusalem, also known as the Knights Hospitaller. The order was founded in Jerusalem in 1080 to care for the sick and poor, and spread across Europe. The English ‘branch’ established on 10 acres just outside the City walls apparently by a knight, Jorden de Briset. It was dissolved, as we’ve already heard, in 1540.

WHERE: Crypt, St John’s Church, St John’s Lane, Clerkenwell (nearest Tube stations is Farringdon); WHEN: The crypt can only be visited on tours – public tours are held at 11am and 2.30pm on Tuesday, Friday and Saturday; COST: Free (a suggested £5 donation); WEBSITE: www.museumstjohn.org.uk. 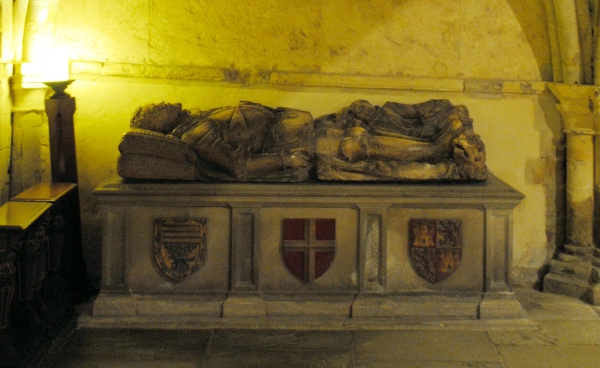