Built in the 16th century for King Henry VIII, Bridewell Palace only had a short-lived life as a royal residence before it was handed over to the City of London and used as a poorhouse and prison. 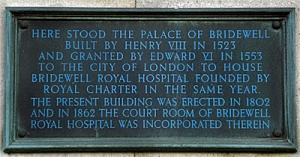 Located on the western bank of the Fleet River (the site is now occupied by Unilever House and remembered in the place names of Bridewell Place and Bridewell Court), the palace – named for a holy well located nearby which was dedicated to St Bride  (St Brigid) – was built on the direction of the king’s key advisor Cardinal Thomas Wolsey between 1510-15 on land which had previously been the site of St Bride’s Inn.

In 1515 Cardinal Wolsey gave it to King Henry VIII after taking up residence at Hampton Court and York Place  – Henry was looking for a royal residence in London after the Palace of Westminister was largely destroyed in a fire in 1512. Work continued on the palace until its completion in 1523.

The palace, the site of which is now marked with a plaque on the approach to Blackfriars Bridge, consisted of two courtyards surrounded by brick buildings with the three storey royal lodgings (separate quarters for the king and queen) located around the inner courtyard and entered by a grand staircase from the outer courtyard. It also featured a watergate was located on the Thames and, interestingly, Bridewell was the first royal palace not to have its own great hall.

Among historic events hosted here was the visit of the Holy Roman Emperor Charles V in 1522 (the emperor did not stay here but his entourage did). In 1528 meetings of the papal delegation took place at Blackfriars (located next door and joined by a specially built gallery) to discuss the king’s divorce from Queen Katherine of Aragon – it’s here that the Queen made her most famous speech declaring her fidelity to the king – and for its duration the king and queen lodged at Bridewell. It’s also said that it was at Bridewell Palace that artist Hans Holbein the Younger painted his famous work – The Ambassadors (see our earlier post on this here).

Following Cardinal Wolsey’s fall from favor in 1529, King Henry VIII no longer used the property (he took over the Palace of Whitehall, then known as York Place, as his main residence in 1530 – for more on this see our earlier post here). It was leased for much of the following decade to the French ambassador in London before, following petitioning for a new hospital for the poor from Nicholas Ridley, the Bishop of London, King Edward VI gave it to the City of London in 1553. They took over fully in 1556 and converted the palace into a prison, hospital and workrooms (we’ll deal in detail with the prison in an upcoming post).

The “city of dreaming spires”, Oxford is a delight for the student of historic architecture, boasting an impressive array of medieval and later, classically-inspired, buildings. 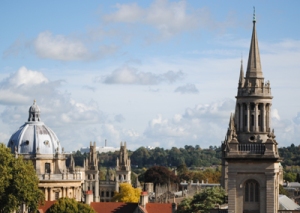 Only about an hour from London by train (leave from Paddington Station), Oxford was established as a town in the 9th century and rose to prominence during the medieval period as the location of a prestigious university, an institution which remains synonymous with the city today.

Major development followed the Norman Conquest the castle was constructed, the remains of which were included in a £40 million redevelopment several years ago of the area in which it stands and which now houses the Oxford Castle Unlocked exhibition which looks at some of the key figures in the castle’s past (you can also climb St George’s Tower for some great views over the city).

The university first appears in the 1100s and gradually expanded over the ensuing centuries gradually evolved to encompass the many medieval colleges which can still be seen there today.

Something of a hotbed of activity during the Reformation, Oxford saw the burning of three bishops – Hugh Latimer, Nicholas Ridley and Archbishop of Canterbury Thomas Cranmer at a site marked by a memorial in Magdalen Street. Constructed in the 1840s, it was designed by Sir George Gilbert Scott who drew inspiration from the Eleanor Crosses King Edward I had erected in honor of his deceased wife, Eleanor of Castile, following her death in 1290.

Oxford was also the site of the headquarters of King Charles I during the English Civil War after the king was forced to leave London (the town eventually yielded to parliamentarian forces after a siege in 1646) and was later home to the court of King Charles II after he fled London during the Great Plague of 1665-66.

Canals arrived in the late 18th century and the railways followed. Industrialisation came – in particular, in the 20th century, in the form of a large car manufacturing plant at the suburb of Cowley – and with it an increasingly cosmopolitan population. But at its heart Oxford remains a student city and it’s the students that continue to provide the lively atmosphere in the city centre.

Look for Carfax Tower to get your bearings – formerly the tower of a 14th century church, this lies at the heart of the town and can be climbed for some great views over the surrounding streets. Some of the colleges are also open to the public (see noticeboards outside the colleges for times) – particularly worth visiting is Christ Church which dates from 1524 and, founded by Cardinal Wolsey, was initially known as Cardinal’s College. It features the Tom Tower, home of the bell Great Tom, which was designed by former student Sir Christopher Wren. The college, which is unique in that the college chapel is also a cathedral, is also home to the Christ Church Picture Gallery.

Other colleges of note include the beautiful Magdalen (pronounced Maudlin, it was founded in 1458 – alumni have included writers John Betjeman, CS Lewis and Oscar Wilde), All Souls (founded in 1438 with King Henry VI its co-founder), and Merton College (the oldest of Oxford’s colleges, it was founded in 1264 and is home to Mob Quadrangle, the oldest quadrangle in the university).

Other university buildings which are a must include the Radcliffe Camera – now the reading room of the Bodleian Library, this Baroque rotunda dates from 1748 and was built as a memorial to 18th century physician Dr John Radcliffe, the Sheldonian Theatre – another of Wren’s designs, it was built in the 1660s as the university’s principal assembly room, and St Mary the Virgin Church – the official church of the university, the present building partly dates from the 13th century and boasts terrific views from the tower.

Make sure you also take the time to wander through the water meadows along the River Cherwell (there are also punt rides) and walk along the River Thames, known as the Isis as it passes through Oxford. Keep an eye out also for the ‘Bridge of Sighs’, similar in design to the Venetian landmark, it spans New College Lane and joins two sections of Hertford College.

Other sites in Oxford include the Ashmolean Museum of Art and Archaeology. Considered of the UK’s best, the original Ashmolean was the first purpose built museum in England, opening in 1683. It now houses treasures include art and antiquities with the late ninth century Alfred Jewel, said to have been made for King Alfred the Great, among its prized objects. Other museums include the Pitt Rivers Museum which cares for the university’s collection of anthropology and world archaeology and includes exhibits brought back to Britain by explorer Captain James Cook.

Take the time also to wander through the covered market off high street which has some interesting shops selling everything from clothes to fresh food and flowers and gifts. Fans of Inspector Morse, meanwhile, may also enjoy seeing some of the sites of particular significance in the TV series – there’s an interactive online map here.

A vibrant city redolent with history, Oxford remains of England’s jewels. Perfect as a day-trip destination from London.