Come back tomorrow for the two most popular posts…

The first coffee house to be located in London, this premises was opened by a Greek, Pasqua Rosée, in 1652 and is believed to have been located in St Michael’s Alley off Cornhill. 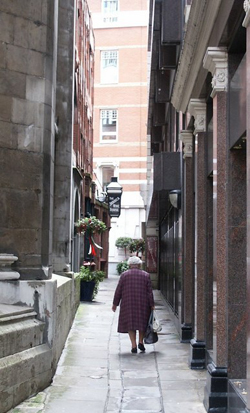 Rosée had come to England as the manservant of Daniel Edwards, a member of the Levant Company who had first encountered him in Smyrna (in modern Turkey) and returned with him. One story says that Rosée decided to start the business after a falling out with Edwards on their return to England; another that Edwards helped Rosée start the business when they realised the interest people had in trying the new drink.

The establishment, which was originally located in a shed in the churchyard of St Michael’s Cornhill, was advertised by a sign which was apparently a portrait of Rosée – hence the name ‘The Sign of Pasqua Rosee’s Head’ – but it was also referred to as ‘The Turk’s Head’. Such was its success that Rosée was apparently selling up to 600 dishes of coffee a day.

Not everyone, however, was a fan of Rosée’s business – in particular tavern owners who saw it as a threat to their own – and aware of his status as an outsider, he is said to have decided to forge a partnership with a freeman of the City of London so there could be no dispute over his right to trade. He found just such a partner in a grocer, Christopher Bowman, in 1654.

The business was relocated following the creation of their partnership across the alley out of the shed and into a rather ruinous house but the new lease was signed only by Bowman. There is a suggestion that Rosée had to flee for some misdemeanour but for whatever reason, his name is no longer mentioned and Bowman was now apparently the sole owner of the business.

Despite the change of ownership, the business continued to trade under Rosée’s sign and it is said to have been Bowman who authored the handbill The Vertue of the Coffee Drink (sic) – an advertising document which credits its creation to Rosée and is filled with some rather dubious claims about the miraculous powers of the drink.

Notable visitors included Samuel Pepys who visited the famous coffee house in 1660, mentioning it in his famous diary.

Bowman apparently died in 1662 and the business went into decline before any trace of it was wiped away in the conflagration of the Great Fire of 1666. The Jamaica Wine House, which features a blue plaque to Rosée’s coffee house apparently erected by the Corporation of London in 1952, now stands near the site Rosée’s original shed.