Postponed due to the coronavirus pandemic this year, the Peter Pan Cup is a swimming event that usually takes place on Christmas Day in Hyde Park’s Serpentine.

The bracing 9am event, which is only open to members of the Serpentine Swimming Club, is a handicapped race across a 100 yard course.

While the tradition of a Christmas Day swimming event goes back to 1864, it became the ‘Peter Pan Cup’ in 1904 when JM Barrie, creator of Peter Pan and a member of the club, presented the first cup to the winner. It was the same year Peter Pan debuted on the London stage (and Barrie would continue to present the cup to the winner until 1932).

Club members have to complete a certain number of winter races to be eligible to swim on Christmas Day. These days the race, which usually starts and ends on the southern bank of the Serpentine, is usually quite a spectacle with hundreds turning out to cheer the swimmers on.

In this, the final in our series on historic sporting events in London we take a look at the first time the Peter Pan Cup was presented at the annual Serpentine Swimming Club’s Christmas Day race in Hyde Park. 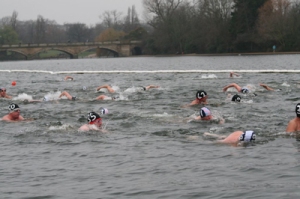 While the origins of the annual 100 yard Christmas Day day race – and the club itself – go back to 1864, it wasn’t until 1904 that author JM Barrie (writer of Peter Pan, or The Boy Who Wouldn’t Grow Up and later knighted), first presented the Peter Pan Cup to the race’s winner (Peter Pan was first performed at the Duke of York’s Theatre the same year). Previous winners had received a gold medal.

Barrie’s involvement apparently came from the fact that he lived nearby in Bayswater and had often seen the swimmers.

The race, which starts at 9am on Christmas Day on the south side of the Serpentine near the cafe, is only open to club members (so don’t turn up expecting to be able to join in) and operates on a handicap system (pictured are swimmers in the 2009 race). Last year’s winner was Neil Price.

It’s worth noting that while this is the club’s most famous event, members swim every weekend throughout the year.

For more on the Serpentine Swimming Club, see http://serpentineswimmingclub.com/.